The course will particularly focus on biomechanics and bowlers.

Former captain Misbah-ul-Haq and controversial offspinner Saeed Ajmal are among 13 Pakistan players who will attend a four-day Level-2 Coach Education Course at the National Cricket Academy, Lahore. Others in the list include Salman Butt, Umar Gul and Zulfiqar Babar. Ahmed Shehzad, who wasn’t awarded a central contract by the Pakistan Cricket Board after the doping fiasco last year, is among the non-retiree list.

According to a report in Cricbuzz on Sunday, the course will prepare the participants for a coaching role, and train them in video analysis, coaching methodology, the implications and application of biomechanics in cricket, batting, bowling and fielding skills.

“It is great news for Pakistan cricket that the international players are going to serve the game through coaching in future. The players have now recognised and realised the importance of the coach education programs, so we are really happy that many cricketers are coming forward towards this aspect of the game, Mudassar Nazar, Director Academies, informed.

“I am very hopeful that the participants will take a step ahead and appear in Level-3 and Level-4 courses, like other former Test players did, these coaches have become Level-4 coaches now. Some of the coaching staff at the NCA and various other academies in Pakistan are also Level-4.”

The course will particularly focus on biomechanics and bowlers. “If you don’t understand the mechanics of bowling actions, you can’t guide players which can result in major injuries, so this course specifically helps you teach the minor details to prevent players from injuries,” Mudassar said.

Misbah explained how a coach’s perspective is very different to that of a player.

“Coaching and playing are two different things, and most important part is how you transform the learning from the course into the practical field. The mindset of a coach and a player are absolutely contrasting. The approach is different and one has to understand this,” Misbah said. 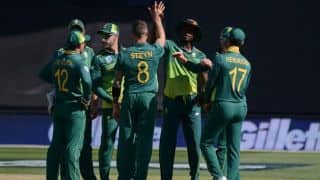 SA vs WI LIVE streaming, Cricket World Cup 2019 Warm-up match: Teams, time in IST and where to watch on TV and online in India