Misbah ul Haq has admitted that he is well aware that there is not much cricket left in him.

New Delhi: Well aware that he has reached the business end of his international cricket career, Pakistan Test captain Misbah ul Haq is planning to call time if the much-awaited series against arch-rivals India happens at the end of the year. The 41-year old admitted that he is well aware that there is not much cricket left in him. Since he is looking forward to his life beyond cricket, he wishes to play only a few Tests more. “If the series against India happens, I want to play that series and probably retire from international cricket. So India series can be my last one,” Misbah said. LIVE SCORECARD: Sri Lanka vs Pakistan 2015, Live Cricket Score: 5th ODI at Hambantota
Having already retired from T20 Internationals and ODIs, Misbah spoke about the pros and cons of being an international cricketer, who only plays the longer format.

“You can view this aspect from two sides. If I talk about the difficult part of it, it is the gaps that might affect a cricketer’s form. Take a player, who plays all three international formats. That cricketer is playing round the year and is effortlessly switching from one format to other.

“But when you are just playing Test cricket, it becomes a challenge since there will be gaps. You straightaway cannot get into the groove but it’s hard work as you don’t have it easy in Test cricket. That’s the difficult part,” feels Misbah, who recently plied his trade in domestic T20 for Caribbean Premier League side St Loucia Zouks. READ: Kusal Perera cruises to hundred against Pakistan in 5th ODI at Hambantota

“Now coming to the positive aspect of playing only Test cricket. There are enough gaps for you to think, just go back to the drawing board and work on your game.” 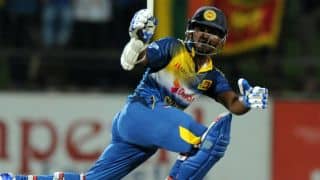 Tillakaratne Dilshan's unique double of 10,000 runs and 100 wickets; who else makes the list?