Mitchell Johnson: Shane Watson has always been able to fight and bounce back from injuries

Mitchell Johnson: Shane Watson has always been able to fight and bounce back from injuries

Johnson said that Watson had battled many injuries in the past.

Australian fast bowler Mitchell Johnson expressed empathy over Shane Watson’s injury that’ll keep him out of their upcoming tour to UAE. Johnson too, has an injured rib and is missing the ongoing Champions League Twenty 20 (CLT20) 2014. However, he is expected to be fully fit for the Test series against Pakistan starting October 22.

“It’s sad for Watto [Watson] to miss out. I feel for him. He’s had a lot of injuries in his career and he’s always been able to fight and bounce back from it, so I wish him the best.”, Johnson was quoted as saying by cricket.com.au.

“It’s sad when you see guys like Shane and Pup [Michael Clarke] fighting with these injuries at the moment. They’re always trying to do the best they can getting back and they all work hard. We’re all the same; we all want to play for our country and make sure we’re all right and 100 per cent.”, he added.

Johnson was asked about his batting abilities, to which he said, “For me, I’m probably a bowling allrounder more than anything. I can bat a bit down the lower order, but if the opportunity came up to bat higher I’ll always put my hand up.” 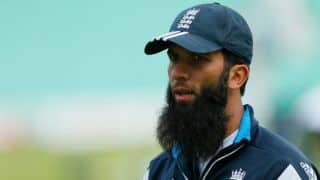 Moeen Ali: I didn't think I would do so well against India

When Ken Barrington’s mother got upset with Brian Johnston