England won by 3 wkts
Man of the Match: Jos Buttler 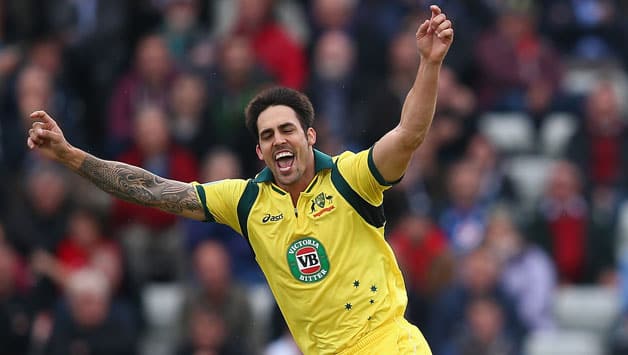 Johnson was not selected for the recent Ashes series which England won 3-0, but he has returned for the five limited overs matches and has already made quite an impact.

The 31-year-old left-armer has a point to prove as he looks to secure a spot in Australia’s squad for the Ashes rematch on home soil later this year and he showed his pace and aggression can still cause problems when he bounced out Jonathan Trott at Old Trafford and then dismissed Kevin Pietersen the same way at Edgbaston.

“I have that confidence and belief in my bowling,” Johnson said on Friday.

“Whoever I’m up against, I’m confident I can get them out and intimidate them — that’s what I’ll be doing here and in every game going forward.

“When I’ve been at my best, being aggressive, I bowl that ‘armpit’ ball or a nice ball to the throat of the batsman — and then I try to use the ball swinging, getting it up there for the lbws or bowleds or catches behind.”

Johnson senses he may have already struck some psychological blows against the opposition, as well as physical ones, after Trott was hit on the helmet in Birmingham.

“I hope they are wary of me,” he said. “I just have to keep being aggressive and keep it simple.”

His Ashes exclusion was hard to take and the pain of that snub has made him all the more determined to force his way back into the Test team.

“It was disappointing to find out I wasn’t in the squad because I thought I’d been performing, coming back from the injury,” he said.

“Watching the first ball of an Ashes series was quite hard, but then I got over it and knew I had to keep working hard.”

Australia are 1-0 up with two to play in the one-day series, but, while Johnson would be pleased to help his team end a troubled tour on a high note, he is more concerned with showing he deserves to add to his 51 Test caps.

“I feel like I’ve been performing. I want to play Test cricket, that’s my number one format,” he said.
“I hope I get the chance to play against England and win an Ashes series.”

Johnson admits it was not always so, but these days he will lose no sleep over the banter and abuse he often receives from England’s fans.

“I didn’t like it when I first came over. I didn’t expect it,” he said.

“I’d been in some pretty good form throughout 2009 and I didn’t really expect to cop as much flak as I did.
“Now, it doesn’t bother me. I know what to expect over here now.

“You start to sing the songs in your head – it’s pretty catchy!

“I think I’m always going to cop it over here now. As soon as I bowl a wide, I get it.

“But it’s all part of the game, and I’ve learnt to live with it and enjoy it.”