Australia allrounder Mitchell Marsh has expressed his disappointment at not making the cut for the 14-man squad to face South Africa in a three-match ODI series at home next month.

Australia allrounder Mitchell Marsh has expressed his disappointment at not making the cut for the 14-man squad to face South Africa in a three-match ODI series at home next month.

Cricket Australia named Aaron Finch as the captain for the series that starts from November 4, taking over the reins from Tim Paine. Marsh, 27, claimed that ODI cricket has been his best format in recent years and that he has the burning desire to play the ICC World Cup 2019.

“I was very disappointed,” Marsh was quoted as saying by Cricket.com.au on Sunday. “I think over the last three or four years, (one-day cricket) been my best format. But right now I’m not in our best XI. There’s no doubt I want to be in that World Cup team. I want to be a leader in the one-day team as well.”

Marsh was part of the Australia Test squad that lost the two-match series 0-1 to Pakistan in the UAE. In four innings, he managed 30 runs.

“It was shattering,” Marsh said of his woeful form with the bat. “You work so hard throughout the winter and you work on so many things to try and be a better cricketer and become better in these conditions. And it didn’t come off for me this series. I learnt a lot again. For me it’s just about taking the opportunity. I know exactly what I have to do to play in the Test team and that’s dominate Shield cricket and make sure they can’t not pick me.”

Marsh said he will be going full throttle in the Sheffield Shield, Australia’s first-class competition. “I’ll be playing every single one of them as an allrounder. I want to be bowling as much as I possibly can to add another string to my bow. But ultimately my only currency is runs. I can do everything right but if I’m not scoring runs, it means nothing.” 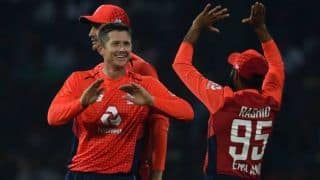