Two sixes off the last two balls of the match from Mitchell Marsh led Perth Scorchers to a heart-pounding six-wicket victory against the Dolphins in the fourth match of the Champions League T20 (CLT20) 2014 at Mohali.

Craig Simmons and Adam Voges opened the innings for the Scorchers, but were soon separated as Voges was out LBW to Kyle Abbott. After that though, it was the Simmons-Sam Whiteman show. The left-handed duo put on 55 runs in just under six overs before Simmons skied one off Cameron Delport to be caught by the Delport himself. He made a valuable 36-ball 48.

Whiteman opened up after that, scoring fluently and swiftly to make 45 off 32 deliveries with six fours and a six before being caught by Daryn Smit off the bowling of Craig Alexander. Mitchell Marsh and Ashton Agar then put on a brief but important partnership, taking the equation to 16 needed off the final over.

Robbie Frylink, bowling the final over, conceded just a single off the first ball before dismissing Ashton Agar. The Scorchers were only able to get three more off the next two to make it 12 runs required off two balls. But then, this was Mitchell Marsh on strike. He smacked the next ball over midwicket for six to make it six needed off one ball. Marsh then calmly proceeded to smash the final ball of the match for another six to take the Scorchers home in stunning fashion.

Earlier, Perth Scorchers were left reeling from a late assault by Khaya Zondo after Dolphins amassed 164 for seven in the fourth match of the Champions League T20 (CLT20) 2014.

Joel Paris got the ball rolling very early when he bowled Morne van Wyk and Cody Chetty off the fourth and fifth balls of the match. He was on a hat-trick, but Keshav Maharaj managed to survive. Jason Behrendorff then took the wicket of Cameron Delport, caught behind brilliantly by Sam Whiteman, who had to jump and dive to his side, to leave the Dolphins reeling at 12 for three.

Keshav Maharaj lived and died by the sword; he hit five fours and a six in his chancy but gutsy 22-ball 29 before slashing Jason Behrendorff to Joel Paris at third man. Daryn Smit hit the ball around as well before he was dismissed for 21, LBW to Yasir Arafat. Vaughn van Jaarsveld was also caught by Paris off Behrendorff having made seven off 10 balls.

Khaya Zondo, who came in to bat at No 5 scored an enterprising fifty, mixing deft nudges and pokes with hard pulls and aggressive slogs to good effect. Along with Andile Phehlukwayo, he put on a very good 44-run partnership for the seventh wicket in just 25 balls before Arafat knocked over Phehlukwayo. Robbie Frylink hammered an unbeaten 15 off just six balls in the end as the Dolphins got to a commanding total.

Dolphins’ Morne van Wyk won the toss and elected to bat first in a match between the domestic champions from South Africa and Australia. Brad Hogg, at the mature age of 43, became perhaps the oldest player ever to appear in CLT20.

Man of the Match: Mitchell Marsh 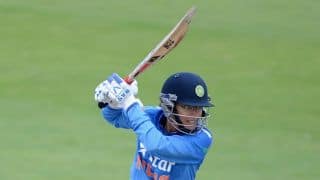