Mitchell Marsh said he has set his sights on seeking revenge in the 2019 edition of the Ashes.

With the on-going Ashes 2015 series already lost for Australia with one Test yet to go, Mitchell Marsh has declared that he has set his sights on seeking revenge in the 2019 edition of the Ashes on English soil. Australia last won an Ashes series in England way back in 2001 and one can understand why Marsh is keen on changing fortunes in the next edition which is still four years away. Marsh even stated that he would sacrifice an IPL contract in favour of county cricket experience so as to better assimilate himself to English conditions. ALSO READ: Three-minute silence to be observed before 5th Ashes Test at Oval to protest game’s administration

“Certainly, that’s something I’ve wanted to do over the past few years, but with the (required UK) visa qualifications I haven’t been able to. Now that I do qualify hopefully it gives me an opportunity to come over here and play as much cricket as I can … to prepare for (Ashes series) in coming years,” Marsh was quoted as saying by foxsports.com.au. ALSO READ: Mitchell Marsh: Craig McDermott’s valuable inputs has helped me greatly

“To be able to learn my trade in these conditions would be awesome. Everyone that comes over here says that it’s awesome for your cricket. Hopefully that’s the case for me. I’ve put the IPL on the back stall for the past few years and I’ve seen the gains in my cricket from that. It will be a case of judging it when it comes and seeing what happens in the future,” Marsh continued. ALSO READ: Cricket Australia ‘love’ to have Ricky Ponting as batting consultant

Marsh indicated that he’d like to have a longer run with the Australian side so as to give himself the best chance of adding value to the team. “I’m a young guy coming into this squad and the more time I get to spend around this team … is going to benefit my cricket. Obviously I’d like to cement my spot in this side and play regular cricket, but I know if I get an opportunity it’s about taking it with both hands.” 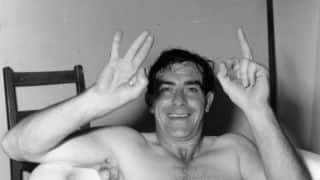