Shaun Marsh makes way for Glenn Maxwell, due to his poor performance in ODIs and Moises Henriques will replace Mitchell Marsh at the moment.

Following their loss in the Test series against Sri Lanka, Australia has sent back all-rounder Mitchell Marsh home to freshen up ahead of the lined up Test series that Australia have in the summer. Now the ODI squad is back to 15 as Travis Head has flown over to Sri Lanka late last week. Selectors have made two changes to the squad that last tasted success in West Indies tri-series against South Africa. Shaun Marsh makes way for Glenn Maxwell, due to his poor performance in ODIs. Moises Henriques will replace Mitchell Marsh at the moment. Shaun and skipper Steven Smith are the only Australians who featured in 2011 Sri Lanka series and in turn claimed it by 3-2. FULL CRICKET SCORECARD: Sri Lanka vs Australia, 3rd Test at Colombo

Mitch has become an increasingly reliable presence in Australia’s 50-over side, with an unbeaten knock of 79 leading Australia into that tri-series final against the West Indies before a match-winning spell of 3-32 from his 10 overs helped the visitors to victory in the decider. Australia coach Darren Lehmann insists it’s simply an opportunity to freshen up the young all-rounder ahead of a crucial five-month period for the national team. Lehmann spoke to cricket.com.au and said, “It’s a big summer ahead for him. We’ve obviously got some quality all-rounders in our one-day squad anyway, so we get a chance to freshen him up and ready to go for South Africa and moving forward.”

Australia enter the ODI series as the top team in ICC rankings while Sri Lanka rank sixth and will look for winning ways to gain historic triumph. Following the ODI leg on the island nation, Australia will take on Sri Lanka in two Twenty20 internationals before traveling to South Africa for a one-off clash with Ireland and five ODIs against the Proteas. Squads for those subsequent series are still to be announced. ALSO READ: Welcome back, Sri Lanka!

With the ball, Marsh’s seamers were only called upon for 35 overs throughout the three-Test campaign for the reward of just two wickets as Australia relied on the frontline bowlers to do the bulk of the work. The chance to rest and recover may be just what the 24-year-old needs ahead of a packed summer schedule featuring Commonwealth Bank Test series against South Africa and Pakistan, a pair of Chappell-Hadlee series with New Zealand both home and away, as well as ODI campaign against Pakistan. There on Australia will face gruelling moment as they face India in February and March. 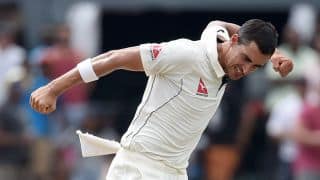