Starc bowled just 19 overs in the second Test at Abu Dhabi which Pakistan won to clinch a 1-0 series victory.

Australia pacer Mitchell Starc, who battled tightness in his left hamstring, might see himself on the bench for the T20 series against Pakistan which begins with the first Twenty20 International on October 24 at Sheikh Zayed Stadium, Abu Dhabi.

Starc bowled just 19 overs in the second Test at Abu Dhabi which Pakistan won to clinch a 1-0 series victory. According to a report in Fox Sports on Monday, Starc underwent precautionary scans and the team management decided that he will remain in the UAE so that the medical team can monitor his situation. Starc has not been ruled out for the T20 series, despite Peter Siddle called as back-up.

Australia s goal now would be to preserve Starc, along with Aaron Finch, Nathan Lyon and Mitchell Marsh, who play in all three formats, for the home series against South Africa and the important Test series against India in December.

Before Australia head in for the T20 series, they will play a warm-up match against UAE on Monday which has been deemed international status by the International Cricket Council (ICC). 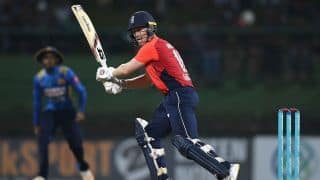