Mithali Raj row: Will BCCI have the guts to treat MS Dhoni or Virat Kohli in the same way, fumes Shantha R

Rangaswamy reckons coach Ramesh Powar will also have to be answerable.

Former India women cricketer Shantha Rangaswamy on Wednesday lashed out at the BCCI for the treatment meted out to veteran Mithali Raj, who was unceremoniously dropped from the side for the ICC Women s World T20 semi-final against England.

It is sad that Mithali has been shabbily treated but more importantly, how is it that her mail to BCCI was leaked? Is it to get even with somebody who will back you in some other case? It looks like people are trying to settle personal scores, Rangaswamy, who has played 16 Tests and 19 ODI, was quoted as saying by Sportstar.

Ramesh Powar (coach) is also answerable. You can t treat a player like that, be it in the dressing room or the dug out.

In her letter to the BCCI, Mithali wrote he she felt depressed for the first time in her 20-long career. She also revealed coach Powar humiliated her during training sessions.

Now that the BCCI is under the Committee of Administrators (CoA), I feel Vinod Rai should step in to restore order. Why is all this happening inside the board? Mithali s case isn t the only issue now, it is much larger, she said.

All this is coming out through BCCI. Will they have the guts to do this with MS Dhoni or Virat Kohli? You can t take players for granted.

Rangaswamy hailed India s performance at the ICC event in the Caribbean which saw the Southern Stars, Australia, clinch the title for the fourth time.

It was a good time for Indian women s cricket; except for the semifinal loss, which was badly managed. On the same day, at the same ground (Sir Vivian Richards Stadium in Antigua), the wicket was slow in the first game between Windies and Australia. You needed to play a waiting game, which Mithali does well. But they all tried to hit out. It was a bad decision to leave her out on that wicket. The success seems redundant now, she said.

Asked if Mithali has still got a lot of cricket left in her, Rangaswamy said: She is needed. It will be of immense help if she can play till the next 50-over World Cup in 2021.

Meanwhile, Nooshan Al Khadeer, a member of Mithali 2005 World Cup side that finished runner-up to Australia, feels the Indian team needs a lady coach. I think women coaches can understand players better. They can handle the women cricketers. It is a place from where we have risen. It was a lot of hard work, she said.

Khadeer also advised Mithali not to hang up her bots in the T20 format. A person who is fit for the format and scoring runs, I think we should leave it to her to take the call. She has played so much cricket for so many years that she knows her body well. When it is time for her to move on, she will take a call, she said. 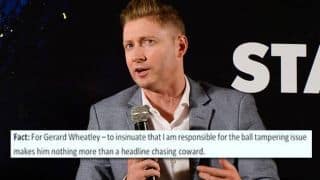