Mithali Raj played a steady innings of 36, which allowed India to register a comfortable 5-wicket win over arch-rivals Pakistan, in Match 7 of Women's Asia Cup T20.

Former Indian skipper Mithali Raj played a steady innings as it was her innings of 36, which allowed India to register a comfortable 5-wicket win over arch-rivals Pakistan, in Match 7 of the ongoing Women s Asia Cup T20 2016, at the Asian Institute of Technology Ground in Bangkok on Tuesday. Apart from Mithali, it was skipper Harmanpreet Kaur, who too played a crucial and unbeaten knock of 26, which sealed India’s win. As for Pakistan, it was Nida Dar and Sadia Yousuf, who claimed 2 wickets each. This was India’s third win in a row, as a win in the next tie would potentially seal their spot in the final. FULL Cricket Updates, India vs Pakistan, ACC Women s Asia Cup T20 2016, Match 7

Earlier, Indian skipper Harmanpreet Kaur won the coin toss and elected to field first, as Pakistan put up a modest total of 97 for the loss of 7 wickets in the allotted 20 overs, with opener Ayesha Zafar scoring 28, and Nain Abidi remained unbeaten on 37, while Ekta Bisht claimed 3 wickets for 20. As for India, they began the chase on a steady note, while it was not until the score of 27, when the opening wicket fell in the form of Smriti Mandhana, who was dismissed for just 14 by Sadia Yousuf, after being caught by Sana Mir in the eighth over. Just 20 runs later, she was followed by Sabbhineni Meghana, who fell for just 8 to Nida Dar, after being trapped leg-before in the 11th over.

Veda Krishnamurthy, who was expected to fire with the bat as well, failed to do so, as she fell for mere 2 to Nida Dar, after being caught by Javeria Khan in the 13th over, as the score read 51 for the loss of 3 wickets. 26 runs later, it was India’s star opener Mithali, who was going strong, and was expected to see the match out, but fell for a healthy 36 to Sana in the 17th over.

The final wicket to fall in the Indian innings was in the form of Jhulan Goswami, who fell for mere 3 to Sadia Yousuf, after being caught by Asmavia Iqbal in the 19th over, as the score read 89 for the loss of 5 wickets, while it was the pair of Harmanpreet and Anuja Patil, who batted out until the end as India chased the modest total down in 19.2 overs. 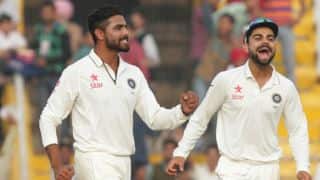