Earlier last month, the Nabi-Rashid duo had also created a benchmark for Afghanistan cricket after they were auctioned in the IPL, to be picked up by the franchise Sunrisers Hyderabad.

Afghanistan cricketer Mohammad Nabi continued to make history as he became the first player from his nation to be featured in the 2017 Caribbean Premier League (CPL) draft. Nabi was picked by St Kitts and Nevis Patriots, in the fourth round of the draft, for a humongous amount of USD 90,000. Teammate Rashid Khan soon followed in the sixth round, as he was picked by Guyana Amazon Warriors for USD 60,000. Earlier last month, the Nabi-Rashid duo had also created a benchmark for Afghanistan cricket after they were auctioned in the Indian Premier League (IPL), to be picked up by the franchise Sunrisers Hyderabad (SRH).

Trinidad and Tobago cricketer Lendi Simmons was the most expensive player of the tournament, picked up by the Jamaica Tallawahs (JT) for USD 160,000. Simmons, who represented the Patriots in 2016, has delivered the second-highest number of runs with 1,238 in 39 matches in the three years of the tournament. This is certainly a boost for the Tallawahs who traded their captain and top player Chris Gayle to the Patriots, who finished bottom last year. The Patriots might further also get the services of the West Indies T20I captain Carlos Brathwaite, considering his West Indies Cricket Board (WICB) commitments do not clash.

Another big gainer from the draft was West Indies wicketkeeper Chadwick Walton, who was bought by the Amazon Warriors (AW) for USD 110,000, three times more than his price in last season of USD 30,000. The Patriots again scored big by acquiring Australian all-rounder Ben Cutting to play for CPL for the first time, for the same amount as Walton. South African Chris Morris will also join the Patriots after being bought for USD 130,000.

The six franchises of the tournament settled on their marquee players a day before the draft. Kane Williamson (Barbados Tridents), Martin Guptill (Amazon Warriors) and Brendon McCullum (Trinbago Knight Riders) as the only New Zealand players in the tournament. The Barbados Tridents (BT) seemed to raise their fast bowling reserves by taking in Wahab Riaz, Wayne Parnell and Tino Best. Knight Riders, leaned towards anonymous spinners and took in 18-year old cricketer from Pakistan Shadab Khan, after his impressive legbreaks and googlies dazzled even his PSL team’s mentor Wasim Akram.

Nine Associate players have been allocated with teams in the CPL along with Rashid and Nabi. All rounder Timroy Allen of the USA was retained by Tallawahs, after he played six matches in their 2016 title campaign, while teammate and batsman Steven Taylor was bought in for USD 30,000 by Warriors, after being with BT since last two seasons. Other players from the USA include fast bowler Ali Khan, retained by Warriors and leg spinner Timil Patel picked for the first time, by Stars, and wicketkeeper Akeem Dodson by Tridents. Canada’s Nikhil Dutta and Hamza Tariq were retained by Patriots and Knight Riders. 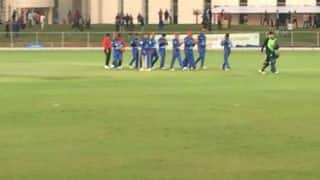 Afghanistan vs Ireland, 3rd T20I: Likely XIs for both sides