Shami's wife Haseen Jahan had registered FIR against him in as many as 7 charges, that include an attempt to murder and rape.

Mohammed Shami in recent times had been in news for all the wrong reasons. Having a very rough time off the field Shami with all the allegations, investigation and accident Shami has made it to the playing 11 in the first game against Punjab.

Shami’s wife Haseen Jahan had registered FIR against him in as many as 7 charges, that include an attempt to murder and rape. The BCCI had decided to withhold Shami s contract after allegations, although he had denied all the allegations. At one point his cricketing career seemed over.

However, Shami was found not guilty of charges related to corruption after BCCI s Anti Corruption Unit (ACU) headed by Neeraj Kumar gave him a cleanchit. Shami was also later offered Grade B central contract by CoA.

His wife had also met Bengal Chief Minister Mamata Banerjee to seek help. She had even approached BCCI and Delhi franchise to stop Shami from playing. Just before the training session began Shami had met with an accident while travelling from Dehradun to Delhi and even got stitches on his head. On April 2, Shami had joined the Delhi squad for practice sessions. In an indication that the injury has not fully healed, his forehead was covered with a bandage. 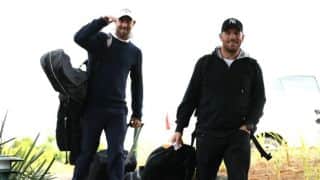