Mohammed Shami finished with figures of 2 for 52 for UP.

Rajkot: Mohammed Shami got two wickets on his return to competitive cricket after nearly 9 months but Uttar Pradesh comfortably beat Bengal by four wickets in a group D league match of the Vijay Hazare Trophy, here today. Batting first, Bengal managed a modest 221 in 48.3 overs with only Sudip Chatterjee playing well for his 97. In reply, UP always had the game under control as they reached the target in 46.4 overs. Openers Umang Sharma (73) and Prashant Gupta (47) added 88 runs while No 3 Ekalavya Dwivedi contributed 45 with three towering sixes. Sharing the new ball with Ashok Dinda, Shami’s figures were 10-0-52-2 as he bowled both Umang and Ekalavya. Live Cricket Score, Vijay Hazare Trophy 2015-16, Bengal vs Uttar Pradesh, Group A match at Rajkot: UP won by 4 wickets; gets 4 points

This is Bengal’s second successive loss after being beaten by Himachal Pradesh in the earlier game. They have beaten Goa in the first game. Put into bat, it was only Sudip (114 balls,9×4), who looked in good touch as in-form players like Sayan sekhar Mondal (15), Shreevtas Goswami (3), Manoj Tiwary (1) and Wriddhiman Saha (16) got out cheaply.

The only notable stand for Bengal was 69 runs for the fifth wicket stand between Sudip and Laxmi Ratan Shukla (32). For UP, Mohammed Javed picked up 4/40 while Bhuvneshwar Kumar had 2 for 22.

On the other hand, Harshal Patel’s all-round performance helped Haryana thrash Jammu and Kashmir by 10 wickets in Group B match. Electing to bat at the Alur Cricket Stadium, Jammu and Kashmir batsmen looked all at sea against Harshal’s (5 for 21) controlled swing bowling and Amit Mishra’s (3 for 4) spin as the bowling duo shared eight wickets between them to wrap up the innings in 22 overs. Off-spinner Jayant Yadav also bagged two wickets as batsman Bandeep Singh top-scored with 24 runs while No.9 Zahoor Sofi remained unbeaten on 20. 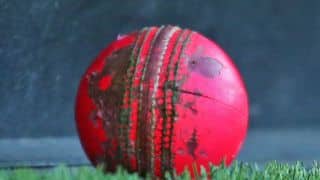