The spotlight will be on India pace spearhead Mohammed Shami, who will be the first in the team to have a 'feel' of the pink Kookaburra.

Kolkata: Mohammed Shami and Wriddhiman Saha are among India players, who will get a first-hand experience of day-night cricket with pink ball when local giants Mohun Bagan and Bhowanipore Club meet in a Cricket Association of Bengal’s Super League final, starting on Saturday. A brainchild of former India captain Sourav Ganguly, the four-day final will be a historic affair as it will provide a glimpse of what can be expected of a pink kookaburra under lights in sub-continental conditions. If the experiment is successful, Ganguly’s association will stand a good chance of holding first ever Pink Ball Test in India that BCCI is planning to hold. READ: Bhuvneshwar Kumar, Mohammed Shami, Jasprit Bumrah gaining from my experience, says Ashish Nehra

The spotlight will be on India pace spearhead and Mohun Bagan’s Shami, who will be the first in the team to have a ‘feel’ of the pink Kookaburra ahead of the proposed first day-night Test against New Zealand in October. Not to forget Saha, who will face the challenge of keeping wickets as well as batting against pink kookaburra under possibly under floodlights.

Before the Duleep Trophy is played under lights, the top Indian players will certainly refer to the feedback from two of their teammates, who can provide them with information. One interesting fact is that Saha is no stranger to pink kookaburra balls as he had the experience of playing in an Emerging Series in Australia seven years back. READ: Virender Sehwag helped me improve my batting, says Wriddhiman Saha

Saha had kept against pink balls, green balls during that A series in Australia back in 2009-10. Cricket Australia used those balls during the List A matches on experimental basis. Shami for one, is excited about the new challenge and is keen to adapt quickly.

“The only change is the colour [of the ball]. Obviously, it will be a new challenge but as the experts are saying it’s the future and we have to adapt quickly,” Shami said. Shami also said that he will get a proper idea once he analyses whats the initial behaviour of the track. READ: Wriddhiman Saha and Naman Ojha: A healthy competition in times to come

“Have to see how the pitch behaves initially. The ball will swing under lights and will make sure it’s not heavily in favour of the batsmen. It will be an even contest between the bat and ball,” he told reporters. For the record, two India stalwarts, Virender Sehwag and Rahul Dravid have played a day-night longer version game with pink ball for MCC during the annual fixture against County Champions in United Arab Emirates.

The BCCI technical committee headed by Ganguly has already recommended the zonal Duleep Trophy to be day-night this season. “It will give me some much needed match practice ahead of the Duleep Trophy. I’m looking forward to it,” Shami added. 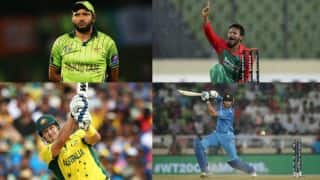 QUIZ: Who holds the T20I record of a century and 4-wicket haul in career?