Moin Khan was removed as the chief selector following the casino controversy.

Karachi: Sacked Pakistan chief selector Moin Khan admitted that his reputation has been significantly ‘tarnished’ after the ‘casino controversy’ during the recently concluded ICC Cricket World Cup 2015, saying that the entire incident was blown out of proportion. PCB could have handled Casino issue properly, feels Moin Khan

The embattled chief selector was recalled to the country for visiting a casino in Christchurch, New Zealand, before Pakistan’s crucial match against the West Indies. Subsequently, Moin was relieved off his duties following Pakistan’s quarterfinal defeat to Australia. Mohammad Hafeez confident of clearing bowling action assessment test

Moin, the former Pakistan captain, said that there is no doubt the casino scandal has tarnished his reputation and standing as a former captain and player, the Dawn reported. Moin further said that the way the media presented the matter negatively and played it up was very disappointing for him, insisting that he had an unblemished record as a player and captain in all his career. Sohaib Maqsood ruled out of Pakistan tour of Bangladesh due to injury

Commenting on the PCB’s stance on the issue, Moin said that the board should have trusted him as it didn’t handle the issue properly, claiming that calling him back sent out all the wrong signals. Kamran Akmal: Discarding Umar Akmal not a smart option, doesn’t reflect well on Pakistan Team management 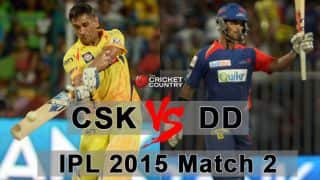 IPL 2015: Five Indian cricketers who can target a comeback into the Indian team