Moises Henriques: Had to adapt and change the way I bowled

Moises Henriques: Had to adapt and change the way I bowled

Portugal-born Moises Henriques, who became the 432 nd player to earn the Baggy Green, said on Thursday that he changed the way he used to bowl. 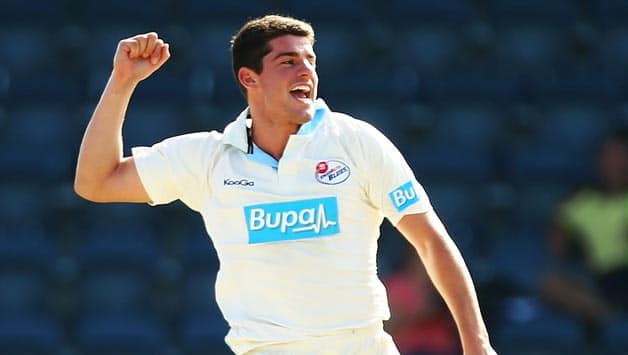 Portugal-born Moises Henriques, who became the 432 nd player to earn the Baggy Green, said on Thursday that he changed the way he used to bowl.

“When I was younger, I was a bit more of a tearaway who liked to come in and bowl as fast as I could. Having suffered a lot of injuries growing up, I had to adapt and change the way I bowled,” Henriques was quoted as saying by Times of India.

Henriques achieved his dream of playing for the Australia in Test, when he was named in the line-up of the first match against India, starting on Friday at Chennai.

“It hasn’t quite sunk in yet. It’s everything I’ve ever wanted to do. To wear the same Baggy Green cap as greats like Allan Border, Steve Waugh and Mark Taylor is an amazing feeling. I want to thank a lot of people… obviously my family, my mum and my dad, and my two younger brothers have been a massive support growing up,” he added.

“Coming from Portugal, my parents didn’t really know what cricket was. I had posters of the Waugh brothers growing up but they were usually gifts. They were two of my heroes and were a major influence early in my career as both of them started out as all-rounder.”

All-rounder Shane Watson also said that he finds Henriques’s style and his similar.

“I do see a similarity between the way Mo (Henriques) plays the game and mine. The way he bowls is quite similar to the way I bowl. He’s had quite a bit of success so far and he’s certainly got the technique and game plan. Moises keeps his eyes open and asks a lot of questions. The way his game’s going, there aren’t too many things wrong,” Watson said.

Michael Slater: A destructive batsman and a self-destructive cricketer