Morne Morkel left the cricketing field for the last time in his international career. He had announced about his retirement before the Australia-South Africa Test series in a press conference. He revealed the reason of his retirement decision to be family commitments. He has played 86 Test, 117 ODIs and 44 T20Is for South Africa.

Morkel made his Test debut in 2006-07 against India in Durban. Ever since he has been in and out of the Test squad firstly due to Makhaya Ntini and later played under the shadow of Steyn. Even injuries kept him away for some time. It was in 2012 when he was given to bowl the first over in Test against England because of his good record against left-handers. In the first Test he took the wicket of Andrew Strauss in the very first over itself.

In the ongoing Test series Morkel became the only fifth South African bowler to enter the 300-wicket club along with Shaun Pollock, Makhaya Ntini, Allan Donald and current teammate Steyn. In the same test where he achieved this landmark, he ended up taking nine wickets and was rewarded the Man of the Match. Sadly the Test would be remembered for the infamous ball tampering scandal. He ends his Test career as South Africa’s fifth highest wicket-taker.

His retirement from International cricket means he has already played his last ODI which was against India. He did not have a very successful ODI series against India but overall he has been one of the finest limited over bowler for the Proteas. Infact, his ODI numbers are better than that of Dale Steyn. Morkel has picked 188 wickets from 117 matches at an average of 25.32. 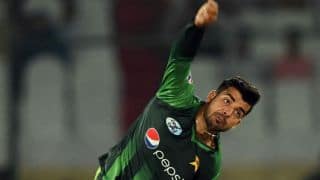