India captain is focused on tri-series and evades all questions relating to his retirement.

Ignoring persistent queries on his shock Test retirement, Indian One-Day International (ODI) captain Mahendra Singh Dhoni today sought to focus on the ongoing tri-series against Australia and England, saying that his team would look to try different combinations keeping in mind next month’s World Cup here. Dhoni stone-walled questions on his Test retirement in the build-up to India’s first ODI against Australia in the ongoing tri-series tomorrow.

Returning to the scene of his last Test, the Melbourne Cricket Ground (MCG), the Indian ODI skipper stayed mum on his exit from the five-day arena. “The BCCI press release [about my retirement] explained everything. You can ask questions, but it is my decision [not to answer them]. I will answer if I want to,” he said, with a straight-face. Dhoni also didn’t answer one other question. When asked who out of Ajinkya Rahane and Rohit Sharma will open the innings with Shikhar Dhawan, he replied, “You will have to wait and watch.”

He was quite keen to talk about other things though, primarily the tri-series as a build-up to the ICC World Cup 2015. “We will look to try out different things in this tournament,” Dhoni said in the pre-match press conference. “We have four games at least and five if we make the final. It is important for us to get the playing combination right. But at the same time we won’t push players who have a few niggles that can transform into major injuries. We will give them that extra time if needed. We will manage the workload accordingly.”

“Getting used to the conditions is very important. The wickets will be quite similar to what we may get in the World Cup, but at the same time we have to stay in the present. Of course we have a few plans that we want to execute and see how confident we are in executing those plans. All those things will come into play so it’s a good platform, playing against two very good teams,” he added.

This essentially ruled out Ravindra Jadeja and Ishant Sharma out of the game against Australia on January 18 with no word on when the former will be fully fit. Ishant, meanwhile, is still recovering from his left-knee pain for which he missed the Sydney Test as well. It brings Dhawal Kulkarni and Mohit Sharma into contention as they are part of the 17-man squad for the tri-series.

“Dhawal and Mohit will be part of our World Cup plans should any of the main bowlers get injured. That’s the major thinking behind them being here. At the same time, we have to play with the 15-man squad who also are part of the World Cup. If we feel it’s important we can give some extra time to a few individuals, then they will also be considered for selection. But as of now, we will look to pick from the first 15,” he added.

When asked about the much-debated inclusion of Stuart Binny in the World Cup squad, the skipper replied, “There are a few venues during the World Cup where it is important that we have a seaming all-rounder in the side. We are playing a couple games in Perth and another couple in New Zealand where the last time we toured there was not much purchase for the spinners”.

“And that’s one area where he may come in. Irrespective of all the debate, the best seaming all-rounder of India has been picked in the World Cup side. So we are hoping that he will stand up and take the responsibility. He is an exciting player. He can play aggressive shots if needed. And he’s a good bowler. If he gives me 6-8 overs, that’s enough. I can use the other part-timers to bowl those 2-3 overs that are needed,” he added.

While India’s bowling attack will come under the scanner after a poor showing in the Test series, the team management will rely on fielding to save some runs and give a lesser challenge to the batsmen.

“Fielding is something we are really proud of. I think it’s a major part of modern cricket irrespective of the format. It was quite evident in the 2013 Champions Trophy [in England] and the 2014 World T20 [in Bangladesh] or the ODIs we have played, that we are a very good fielding side.

India take on Australia on January 18 in their first game of the tri-series. 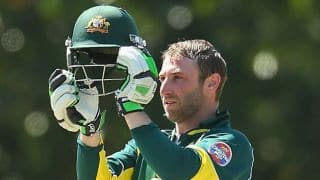 Ross Taylor, as a 12-year old reminded me of Ijaz Ahmed: Mark Greatbatch