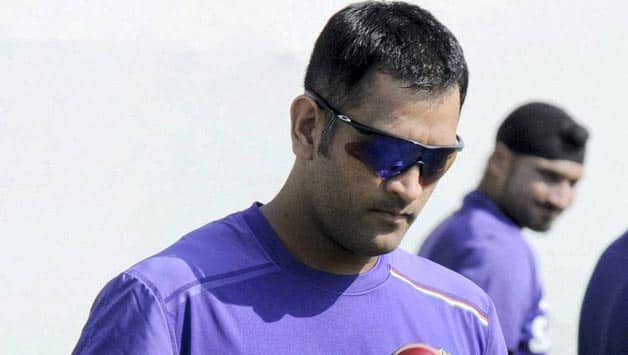 Gavaskar said it was time the selectors looked to the future as Dhoni seemed out of sorts in this series.

“Till the fourth day of this Test I said there is no alternative to Mahendra Singh Dhoni, but now that Virat (Kohli) has come up with a 100 under trying circumstances I think he has discovered a good part about himself. I think he is ready to take on the mantle,” the former India skipper said.

“I think this is something to be looked at in a positive manner because that’s where the future is,” Gavaskar said.

Srikkanth was of the view that Dhoni will be better of without the captaincy burden from now on.

“Dhoni’s become stale and doesn’t know what to do when things go out of the way. He shouldn’t be the Test captain anymore. Had I been the chairman of selectors, I would have picked Dhoni as a wicket-keeper batsman but it is time to look beyond him as a Test captain,” Srikkanth said.

“I will pick Dhoni as a keeper/batsman because his contribution has to be considered. I think he will be better off without captaincy and add more value to the Test team,” Srikkanth said.

Former cricketer Abbas Ali Baig also called for a change of leadership and said Kohli should be given the mantle. “We have to look ahead to the future and plan accordingly”.

Dubbed ‘Captain Cool’ ever since India won the 2007 World Twenty20 Championships under him, Dhoni’s stock has been falling over the past couple of years with poor away results in Tests.

Add to this, the series loss to England in the home series, have severely exposed India’s batting shortcomings after the retirement of middle-order batsmen such as Rahul Dravid and VVS Laxman.

“The easiest thing for me to say right now is ‘I quit captaincy’ and be a part of the side. But that’s like running away from the responsibility,” says Dhoni.

“Of course there are others who will decide. There is BCCI and the administrative people who also want to look into that (captaincy)”, Dhoni had said after the defeat in Kolkata when asked whether India needs a change in captaincy.

But his captaincy record of the past two years shows that the skipper needs to introspect.

In the last two years, India’s winning percentage in Tests stands at a poor 33.33.

Of the 22 Tests played in this period, including the just-concluded Nagpur Test, India have won just seven, lost 10 and drawn five — an abysmal stat given that this team was placed at the top of the ICC rankings not too long ago.

Majority of these wins, five, have come on home turf and given the current stat of affairs, this record too would be affected.

Away from home under Dhoni, India have lost eight of the 13 matches they have played, managing just two wins in the last couple of years.