Dhoni says dew did play a big role in affecting bowlers' performance when they were chasing.

As Chennai Super Kings (CSK) registered their fourth straight win in the Indian premier League (IPL) 2014. skipper Mahendra Singh Dhoni said it was a good toss to lose as dew did play a big role in affecting bowlers’ performance when they were chasing.

“I think the game really changed once they changed the ball, when the ball was not wet it started doing things until it got wet again. It was a decent total, the dew got worse, the opposition bowlers weren’t able to execute plans. We would have batted first as well, so a good toss to lose,” Dhoni said after his side’s five-wicket win over Sunrisers Hyderabad. “Overall we are playing good cricket, everyone has contributed, not everyone in our top seven has been tested. Openers are doing a fantastic job,” he added.

Hyderabad captain Shikhar Dhawan also said the pitch behaved differently in the two innings and dew indeed was a factor in their defeat. “We never knew that dew was going to come tonight, the ball got wet and out spinners could not grip it. It was coming nicely on to the bat. In the first innings the wicket was dry and the ground was dry so the ball was stopping on the batsman, it was difficult to hit the ball,” Dhawan said.

“We planned to get 150 but we did not know dew was going to come… not going to take the credit away from them. They batted well.” West Indies batsman Dwayne Smith, who hit a magnificent 66 in CSK’s win, was declared man-of-the-match

“The plan was to stay calm and be positive, don’t worry about anything. We (he and Brendon McCullum) tried to get as much runs early up and make it easier for the other guys,” he said. 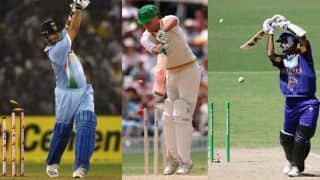