Kolkata: In awe of Virat Kohli‘s batting genius in the World Twenty20 win over arch-rivals Pakistan, Indian captain Mahendra Singh Dhoni said the elegant right- hander’s willingness to take challenges head on sets him apart from others. In a low-scoring tense encounter last night, Kohli played the sheet-anchor role to perfection by slamming a 37-ball 55 to guide India to to a six-wicket win at the Eden Gardens. The hosts were chasing 119 in the rain-curtailed game. “It’s the hunger to perform, his willingness to take up the challenge, that sets him apart. His biggest plus point is he takes everything as a challenge. He wants to contribute in each and every game. That’s why, he prepares well, he takes care of his fitness,” Dhoni said in praise of the Kohli in the post-match press conference. FULL CRICKET SCORECARD: India vs Pakistan, Group B Match 19 of ICC T20 World Cup at Eden Gardens

“He understands how he is supposed to bat in different wickets to score runs. We all know once he gets going, he always converts it into a big innings which I feel is one of the most important things for any youngster. When you’re scoring runs, make sure you score a lot of runs. Everyone will go through a bad patch but what you can do is try to minimise the duration. The best way is when you’re going through a purple patch make sure you score a lot of runs,” he said

In two back-to-back innings against Pakistan — the 49 he scored in the Asia Cup last month and the unbeaten knock here yesterday –, Kohli proved his class once again and Dhoni said the swashbuckler’s ability to convert starts by simply rotating the strike is also an added plus . “It’s about how you’re converting and about tackling pressure. Often individuals go for big shots when there’s a lot of pressure. The best way to deal with it is just take a single and go to the other end. It calms you down and at the same time you’ve the positive intent as you’re looking for a single. If you see his batting that’s what he really does,” he said.

Dhoni further said that running between the wicket is an an area where Kohli has an edge over others. “You’ve to push hard. He loves batting with individuals who can run hard with him. Running hard is the easiest way to score runs. You hit it in the mid-wicket, long on region and if you’ve two good runners you can convert one into two and that puts a lot of pressure on the bowler and the fielding side,” Dhoni explained.

On the flip side, the win has done little to help India’s Net Run Rate which took a hit owing to the loss to New Zealand in the campaign-opener. “Our net run-rate is quite down. It’s our priority in the next two games. It’s not only about winning but also have to look at the NRR at some point of time,” Dhoni said. Contrary to expectations, the Eden wicket was a square turner and Dhoni said probably it was because the track remained under covers owing to rains and thundershowers in the evening that curtailed the match to 18-over-a-side.

“Initially we never thought it would turn so much. I thought there was a bit of moisture. They watered the wicket yesterday and I don’t think it got much sun today. I felt it was quite damp when I saw the wicket before the start of the game. Like a cosmetic thing, the top surface may look good when you roll a wicket but underneath it was moisture. It’s because of that spinners were getting a lot of turns. If you hit the seam, ball was turning,” he said.

Asked about his decision to field, Dhoni explained: “We thought there would be some kind of assistance for the bowlers initially. When there’s extra moisture the spinners get extra turn. Looking at it we felt it would only get better. It can’t get worse. It was not a dry kind of wicket where it was brittle or breaking down. Dhoni further backed the struggling Suresh Raina and said he deserved to be there at No.4 despite his string of poor shows.”

“That’s the obvious question people would ask if one or two batsmen are not scoring runs. If Shikhar does not score runs, there will be questions why not Ajinkya for opener… It’s important to back players. There’re too many players who need to bat at No 3. Stats say a lot of individuals can bat at no 3 but Virat has an edge. The same way, I feel Raina deserves that No 4 more than anyone else. Overall, he’s the best option.”

Despite his fine show with 12 runs from three overs, Ashwin was denied the complete quota of four overs and Ashish Nehra and Jasprit Bumrah bowled the last two overs. Dhoni said he was concerned about conceding too many runs at the death and Ashwin could have been targetted by Pakistani batsmen, who are good players of spin. “Pakistan batters are good players of spin bowling. There was a chance they would have gone after Ashwin if I had given him the ball. I went for the safer option. They were probably under extra pressure to get some more runs. At times when you look for those extra 20-30 runs you end of losing those many runs.” 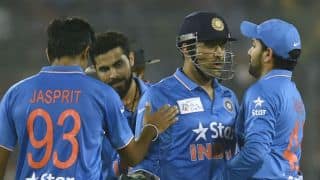