Saurabh Tiwary's hundred went in vain as Jharkhand lost to Hyderabad by 21 runs, leaving them on the brink of elimination from the Vijay Hazare Trophy one-dayers on Friday.

Kolkata: Saurabh Tiwary’s hundred went in vain as Jharkhand lost to Hyderabad by 21 runs, leaving them on the brink of elimination from the Vijay Hazare Trophy one-dayers on Friday. It was an off day for Jharkhand captain Mahendra Singh Dhoni, who struggled in his 47-ball 28 (4×3) before being bowled by left-arm spinner Mehdi Hasan in their modest 204-run chase. Cruising to his second century in three matches, and fourth overall in List A, Saurabh slammed 102 from 104 balls. His knock was studded with seven sixes and five fours and Jharkhand needed 31 runs from 70 balls. Vijay Hazare Trophy: Harbhajan’s 4-33 steers Punjab to 5-wicket win over Haryana

But Jharkhand collapsed after Saurabh holed out to Chama Milind at third man in the 39th over. Jharkhand lost six wickets for 44 runs in a stunning collapse to fold for 182 in 44.4 overs. Hasan claimed 3/40, while Ravi Kiran, Chama Milind and Akash Bhandari took two apiece as Hyderabad made a stunning turnaround to post their fourth win from as many matches. Karnataka and Hyderabad have 16 points each. Having lost two from five matches, Jharkhand (12 points) will now have to post a big win against Jammu and Kashmir at Bengal Cricket Academy in Kalyani on March 6 to keep their hopes alive.

Before he could make it big Hasan bounced castled Dhoni to break the partnership for 70 runs that triggered the collapse. Saurabh, however, remained unperturbed and counter-attacked Hasan slamming the left-arm spinner for three sixes and one boundary in the 37th over that yielded 23 runs. Earlier Hyderabad were restricted to 203/8 in the stipulated 50 overs as their batsmen struggled to get going on a slow and low wicket after they were sent in by Dhoni.

Sumanth Kolla (48) was Hyderabad’s top-scorer, while Bavanaka Sandeep (43) lent fine support at the other end in an 82-run third wicket partnership. But the duo could not convert their starts with Dhoni using his spinner Shahbaz Nadeem brilliantly. The left-armer not only broke the partnership but ran through the middle-order with his 3/27. Dhoni s Jharkhand registers 7-wicket win over Services in Vijay Hazare Trophy

Meanwhile, Karnataka continued their winning streak and routed Jammu and Kashmir by seven wickets with 194 balls to spare to consolidate their position atop the standings and virtually qualify for the quarterfinals from group D. Put in to bat, Jammu and Kashmir were shot out for 108 in 28.4 overs with rookie medium-pacer Prasidh Krishna returning with career-best figures of 4/15. Karnataka chased down the target in 17.4 overs with IPL’s Rs 2 crore pick, K Gowtham, slamming an unbeaten 57 from 46 balls (9×4, 1×6). 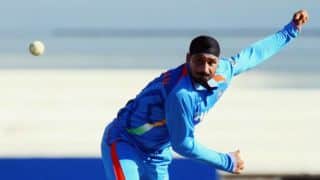