The non-bailable warrant was issued against MS Dhoni for non-appearance before the court on January 7.

New Delhi: The non-bailable warrant issued against India ODI captain Mahendra Singh Dhoni in a case of hurting religious sentiments was withdrawn by a local court in Anantapur in Andhra Pradesh. “The court that had issued a non-bailable warrant against cricketer MS Dhoni under the pretext of posing as Lord Vishnu on the cover page of Business Today magazine has today recalled the issued warrant,” stated a media release issued by Dhoni’s management firm Rhiti Sports. “Our legal team led by Mr. Rajneesh Chopra today moved an application before the local court in Ananthpur, Andhra Pradesh, thereby seeking cancellation of the non-bailable warrant as issued against the cricketer by the local court vide its order dated 07.01.2016,” it further said. READ: MS Dhoni moves to Supreme Court over his Lord Vishnu portray in Business Today

The non-bailable warrant was issued against Dhoni for non-appearance before the court on January 7. “In today’s hearing, the main ground of challenge posed by Mr Rajneesh Chopra (Dhoni’s lawyer) to the issuance of the nonbailable warrant was that MS Dhoni in person was never served by the summons as issued by the court. Due to this reason, Mr. Dhoni and our legal team were unaware of the fact that they were required to appear in the local court at Ananthpur on 07.01.2016,” the company claimed in its statement. MS Dhoni’s photo on magazine cover ‘work of art’: Delhi Police

“It was further informed to the Court by Mr Chopra that the non representation on behalf of Mr Dhoni before the Ld Trial Court was not intentional but only due to the above-mentioned reason. The Ld Trial Court found merit in the arguments of Mr Chopra and was pleased to recall the order of issuance of the non-bailable warrant as passed against Mr. Dhoni,” the release further stated.

The matter is now listed for further proceedings on February 25. The star cricketer got in troubled waters in 2013 for appearing in an advertisement on the cover of Business Today as Lord Vishnu holding a number of objects. The ad prompted social activist Jayakumar Hiremath to file a case to register a complaint against him, with a case being registered against him under section 295 and 34 of the Indian Penal Code (IPC). 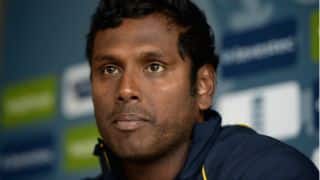