Mumbai Indians beat Rajasthan Royals by 33 runs in the final of the Champions League Twenty20 (CLT20) 2013 at the Feroz Shah Kotla, Delhi on Sunday. 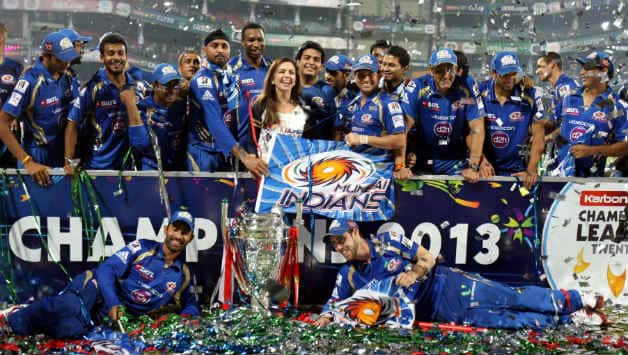 Mumbai Indians beat Rajasthan Royals by 33 runs in the final of the Champions League Twenty20 (CLT20) 2013 at the Feroz Shah Kotla, Delhi on Sunday.

A three-wicket over — 17th over from the Rajasthan Royals’s innings — bowled from Harbhajan Singh proved to be pivotal in the game that had all the ebbs and flows which was akin to a compelling thriller. Needing 48 to win from 24 deliveries with Ajinkya Rahane batting on 65, Rajasthan had a decent chance to pull off an amazing heist. The first ball of the over was a full-toss from Harbhajan hit straight to Dwayne Smith at deep mid-wicket. Harbhajan then had big-hitting Stuart Binny with the other one that bamboozled the Rajasthan middle-order batsman. Kevon Cooper began his innings with a four past short fine-leg. Harbhajan set him up with a flighted doosra which brought him out of his crease just a little bit and he was stumped by Dinesh Karthik.

That brought Rajasthan captain Rahul Dravid to the crease and he was out playing a slog off Nathan Coulter-Nile’s yorker since Rajasthan needed more than 14 runs per over. Kieron Pollard took three wickets in the penultimate over dismissing Dishant Yagnik caught behind for six. Rahul Shukla was out trying to slog Pollard off the first delivery caught at square-leg by Smith. Faulkner was out off the second ball hoodwinked by the slower ball caught by Smith before Mumbai Indians jumped in joy with ecstacy.

After a promising start Rajasthan lost the plot during the business end of the innings and fell short agonisingly to hand over Mumbai their second CLT20 championship. The highlight of the Rajasthan innings was the second wicket stand between Ajinkya Rahane and Sanju Samson of 109 off 67 deliveries. Samson walked in at No. 3 after Rajasthan Royals began their run-chase in a positive manner. Kusal Perera hit Glenn Maxwell for two boundaries off the first three balls. There was a mix-up off the fourth ball when Perera pushed the ball in the gap between covers and mid-off and started to run. Rahane didn’t respond to the call and Perera was left stranded. The fall of wicket didn’t prove to be Rajasthan’s downfall.

Samson and Rahane took the control of the run-chase. The duo batted with a lot of aggression and kept Rajasthan in the hunt by taking their chances with clean hits.

Samson hit Harbhajan for a straight six. In the next over the Samson carted Rishi Dhawan over wide long-on to get the momentum in favour of Rajasthan. Rahane too got into his elements by smashing Dhawan over mid-wicket for a huge six. Rohit Sharma introduced Nathan Coulter-Nile into the attack. Samson took the attack to him. Coulter-Nile’s length delivery was hit over long-on for a six. When he pitched up Samson nonchalantly drove him down the ground. The Mumbai bowler bounced Samson he top-edged the pull over fine-leg for a boundary.

Ojha was taken to the cleaners by Rahane when he slog-swept the left-arm spinner over mid-wicket. Samson deposited a long-hop off the frontfoot towards mid-wicket. If belligerence was part of Samson’s batting then finesse had a place in his the compelling compendium as well. The cut shot off Pollard eluded the diving backward point which brought Samson’s half-century.

After scoring his fifty, Samson looked to play shots almost off every delivery. He tried to scoop Coulter-Nile past short fine-leg but got hoodwinked by a slower ball. He offered a chance to Glenn Maxwell at wide long-on off Coulter-Nile. The catch was spilled since Harbhajan from mid-wicket distracted Maxwell.
Samson was dismissed in Ojha’s final over when he looked to slice the ball over covers but instead got beaten by the spin. The ball flew to short third-man where Harbhajan took the catch, timing his jump to perfection.

Shane Watson had the perfect setting to finish the game. The need of the hour was a special Watson innings. He hit Pollard for a towering six to announce his intentions. He tried to attack Harbhajan in his comeback over and ended up offering a high catch to Pollard at long-on.

Rahane was the vital cog to Rajasthan’s run-chase. The things didn’t pan out well for Rajasthan who were well on course for the victory. Did they miss Brad Hodge?

In the end, Mumbai held their nerve during the vital moments of the game. Harbhajan (four for 32) was declared the man of the match. In 2011, when Mumbai won Harbhajan won the coveted award as well.