Follow live blog of the first match of the IPL 2014.

(The seventh edition of the Indian Premier League (IPL) kicks off in the United Arab Emirates with the first match at Abu Dhabi. Both Mumbai Indians (MI) and Kolkata Knight Riders (KKR) have won the trophy in the past and would want to start the season well. Catch Live Scores and Live Updates of the match here)

Corey seems all at sea against Piyush here.

Piyush on. This could be the make-or-break over.

MI 106/4 (16.1)
Pollard 0(2)
Another good innings comes to an end. Rayudu steps out and plays a nothing-shot; Robin fumbles initially but whips the bails off in time. MI in trouble.
OUT! Rayudu st Uthappa b Narine Rayudu 43(38)!

Another beauty! Morne is breathing fire here! Almost an encore of the previous ball!

What a peach! The ball took off, and broke Pollard’s watch!

Looks like Pollard has taken a leaf out of Chander’s books: he’s digging the bail very deep inside Mother Earth.

Rayudu shuffles across, and this time he connects: the ball runs past Uthappa to the long-leg fence.

Strategic timeout again. How they love these breaks!

the umpires seems to be auditioning for #BigBoss #IPL2014 #MIvsKKR a satchel being hung on their body!

It seemed Rohit was waiting for that. Morne bowled one just short of good length, and Rohit smoked him over mid-wicket into the stands.

That, as they say, has missed everything. Narine tosses one up, Rayudu gives it the almighty heave, and misses it completely. Four byes for MI.

Once again, it’s Sunil Narine time. Remember, he can bowl three out of the six overs left.

MI 83/2 (14)
Rayudu 40(33), Rohit 19(16)
Quality bowling from Morne out there. He has been fast, accurate, and has generated steep bounce off a length. The spinners have supported him beautifully. The KKR bowlers have done an excellent job here.

Rayudu moves across the line goes for the almighty something-slog; it’s always difficult to do these things against Morkel. A dot.

The asking rate goes past the 12-mark now.

Q: Which SA bowler starts dancing whenever it rains ? A: मोरनी Morkel. #MIvsKKR

Gauti summons Morne. This should be interesting.

Rayudu hits that beautifully to that extra-cover boundary.

Shak to bowl out.

Not sure if I’m watching @IPL or watching Shayari by @sherryontopp. Somebody plz stop him 😀 #IPL #PepsiIpl #MIvsKKR

Rayudu lofts Kallis over fine-leg for four more. A calculated stroke there.

Now Manish slips. Looks like he has pulled a muscle.

Not sure if I’m watching @IPL or watching Shayari by @sherryontopp. Somebody plz stop him 😀 #IPL #PepsiIpl #MIvsKKR

Rest of the commentators trolling Sunil Gavaskar like group of friends troll the one who bags the good job/hot gf while rest remain same.

Rayudu is up, and gets going: steps out to dispatch Shak over mid-on for four.

Rayudu is down there. He had tried to execute a slog-sweep. Seems Shakib has taken up Bodyline.

HUGE slog-sweep from Tare. Straight into the crowd!

Morne is getting it to bounce from a length. He can be lethal if he gets going.

Oh, they’ve stuck a camera on the umpire’s hat. Wish they had this for Asad Rauf. Would have loved to see everything he laid his eyes on.

If IPL is Filmfare, Kallis is Rekha.

Morne on fire here. Excellent line, moving the ball ever so slightly off Hussey. This could easily have been played in whites.

It sad Pakistan players no allowed in IPL. It chance to learn new thing. Like Butt can learn how to do matchfixing without getting caught.

Vinay Kumar bowls a bouncer (yes, you have read it right). Tare casually hooks him for four.

It will be Vinay Kumar. A Ranji Trophy-winning captain. Irani Cup and Vijay Hazare Trophy to boot.

Ordered your pizza? Tare and Hussey are out there.

#IPL7 another season. Same old story with King Kalis. Criticised for first 30 balls and called a champion at the end of his inings.

It’s sort of hard to believe (or maybe not) that these very stadiums are empty during Pakistan’s games here. #MIvsKKR #IPL7

Looks like the Supreme Court has directed the IPL to use Ravi Shastri for all in-stadia announcements too. #IPL7 — Fake IPL Player (@_fakeiplplayer) April 16, 2014

Who is this Yak Kallis that Navjot Sidhu keeps referring to? #IPL7

Still no Gujarat team in the IPL. There is no Modi wave. Nonsense.

KKR 163/3 (20)
Yusuf 4(4), Surya 13(5)
What a finish from Suryakumar! He just took the MI asking rate past the 8-mark. Kallis and Manish had an excellent partnership, but Malinga’s excellent death-bowling pegged them back till Suryakumar played that cameo. Can KKR defend the target on this pitch?

Suryakumar finishes in style over extra-cover. That’s another fantastic boundary. KKR finish with 163.

What a nonchalant reverse-something from Suryakumar! Four!

A swipe past long-leg! Four!

KKR 149/3 (19)
Yusuf 3(3)
Malinga you beauty! They never got going against Lasith there, and all Shakib could do was to hole out tamely to Rohit at cover.
OUT! Shakib c Rohit b Malinga 1(1)!

They just cannot get Malinga away. Fabulous death-bowling there.

Shakib walks out. Mind you, he can tear into any attack on his day.

KKR 145/3 (18.2)
Yusuf 1(1)
A lofted off-drive from Kallis: it was never a catch, but trust Corey to come up with something spectacular as he dives to take one inches from the ground. A fitting end to an excellent innings.
OUT! Kallis c Anderson b Malinga 72(45)!

… and Rohit stops a scorcher there…

Kallis treats Zak with utter disdain there. He simply swats him across the line for a four, no, a six, no, a four, is it a four or a six? It has hit the ropes, so Billy rules it a six!

Zak to bowl out here.

KKR 135/2 (17)
Kallis 64(41)
Another Malinga yorker, slightly slow, and there goes Manish’s off-stump. Completely uprooted. If perfectly executed, a Malinga yorker is a sight for sore eyes…
OUT! Manish b Malinga 64(53)!

An leg-glance there from Manish as the ball rushes past CMG. Four leg-byes.

Whoa! Where did that come from? Malinga attempts a yorker, and clean as a whistle goes Manish’s slog past mid-wicket, over the fence!

KKR 125/1 (16)
Kallis 64(41), Pandey 58(47)
A 15-run over to follow a 20-run one. Things can only get better for KKR from here. Kallis looks ominous, and Pandey is not too bad either. The good thing for MI is the fact that they have managed to bowl out the fifth bowler. Yet another strategic time-out now.

Kallis goes big again. That one from Pollard disappeared past square-leg. Four more!

Pollard bowls on the leg-stump, Kallis goes down on one knee, and plays it smartly past Gautam. Malinga never had a chance.

Kallis plays his trademark slog-sweep! The ball soars between deep mid-wicket and deep square-leg for another six!

Ojha tosses it up, and it’s HUMONGOUS! Kallis’ shot disappears over wide long-on! Is this when they explode?

Manish reaches his fifty with a single.

Rohit brings on Pollard. He somehow needs to get two overs out of his way.

KKR 86/1 (13)
Barring that bouncer, once again an excellent over from Lasith, restricting the batsmen to singles. All four bowlers have been bowling brilliantly, but Rohit has the fifth bowler issue to deal with…

Malinga bounces; you cannot bounce at Kallis, he has been facing Steyn and Morne in the nets until recently. A well-placed hook beats Zak’s valiant dive.

KKR 78/1 (12)
Kallis 28(26), Pandey 47(38)
MI clearly the better team here. The spinners are doing an excellent job, taking the pace off and restricting the batsmen to singles and dot-balls. They have been supporting Zak and Malinga well. The chink, as mentioned befire, remains to be Corey.

Bhajji tosses one up slightly, and Pandey goes big! Past long-on for four!

KKR 69/1 (11)
Kallis 27(25), Pandey 40(35)
Ojha has pulled things back a bit after that boundary. He has been bowling slow intentionally, and the batsmen have found things hard to go from the first over.

Ooooh, Manish simply creams Ojha through the covers there!

Ravi Shastri would be really bad at READING BEDTIME STORIES.

A rank long-hop from Corey, and Manish pulls him with all the power he can muster. A four over mid-wicket!

Two minute silence for people who had Gautam Gambhir in their Fantasy Team. #IPL7 #KKRvMI #MIvsKKR

That is a Kallis-special (or ispeshal, as they say in Kolkata). Swept Bhajji with disdain for four.

Someone is booing. That may be a KKR supporter.

Manish Pandey swats the last ball past mid-wicket. That’s another four to break the monotony.

The Powerplay is over. Bhajji on now.

Ojha on now. The man who has been shunned by the Indian selectors for all limited-overs cricket.

Zak gets a third over. This can be interesting…

Manish goes high and straight next ball, yielding a six. Oh well, a Yes Bank Maximum. Some habits do not die.

First four for KKR! Through the mid-wicket!

KKR open the account with a wide that Gautam collected well down the leg-side.

A few dot-balls there. Gauti looking a tad impatient.

Hussey is still electric on field.

The umpires are equipped with rather strange contraptions across their shoulders.

Kallis and Gambhir walk out. The stadium is not what you call full.

Marcus Erasmus and Richard Illingworth stride out amidst firecrackers in broad daylight (yes, you have read that right).

While the match is yet to begin, do have a go at our IPL quiz. There is a Rs 500 gift voucher up for the grabs every match. I assume you know all about the Fantasy League, so I will not elaborate on that.

Here are the teams:

Kolkata Knight Riders have won the toss and have elected to bat first. At the toss Gautam Gambhir said that the four foreign players in the team are Morne Morkel, Jacques Kallis, Sunil Narine and Shakib Al Hasan. Rohit Sharma said they have five batsmen, two all-rounders and four bowlers.

Welcome to CricketCountry’s coverage of the Indian Premier League (IPL) 2014. We are ready to get going with the first game of this edition being played at the Sheikh Zayed Stadium, Abu Dhabi. The defending champions Mumbai Indians take on the previous title holders, Kolkata Knight Riders. The two units have undergone some considerable changes after the big IPL 2014 auction which was held in Bangalore this year. There are of course a few familiar faces in both sides and these teams would bank on them. But, one gets the feeling that it is all about how well a team will gel and advance in this tournament.

I am Abhishek Mukherjee and will take you through this contest. Of course, it is the first game of the season, so there is plenty of excitement and one is more interested to see how well the teams play this season with a revamped roster.

You can read our preview to the game here. 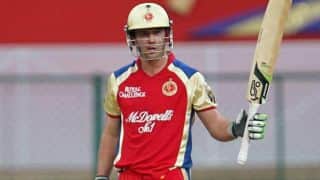 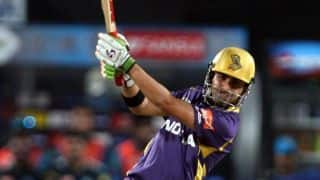