KXIP won by 7 wickets against MI in the 43rd match of the Indian Premier League (IPL) Season 9 at Visakhapatnam.

Kings XI Punjab (KXIP) eased to victory against Mumbai Indians (MI) in the 43rd match of the Indian Premier League (IPL) edition nine. The Murali Vijay-led side cruised to victory with 7 wickets in hand and 3 overs to play. It was a magnificent performance by the bowling unit which took them towards a much-needed win against MI. Marcus Stoinis was adjudged the Player of the match for his superb bowling figures of 4-15 in his 4 overs. KXIP now have 8 points from 11 games and are placed at second-last on the IPL points table. The win although gives them a ray of hope but their fate rests in the hands of how other teams perform. FULL CRICKET SCORECARD: Mumbai Indians  vs  Kings XI Punjab , Live Score, 43rd T20 Match, IPL 2016

Murali Vijay and Wriddhiman Saha, both scored half-centuries for KXIP in their run-chase in response to MI’s total of 124-9 in 20 overs. Catch the video highlights of the match here: Match 43: MI vs KXIP

Mumbai Indians were off to a poor start and could never recover from it. Regular loss of wickets kept them on the back-foot throughout the match. Kieron Pollard top scored for them with 27 off 20 balls and it was some brilliant bowling display that was on show by KXIP. Mohit Sharma and Sandeep Sharma took 2 wickets each. Akshar Patel got one scalp but Stoinis was right on the money at took 4 crucial wickets.

Hashim Amla and Glenn Maxwell could not open their accounts and were both out for a duck but KXIP still eased past the MI total without any pressure as Gurkeerat Singh Mann hit a boundary to seal the win for Kings XI Punjab. 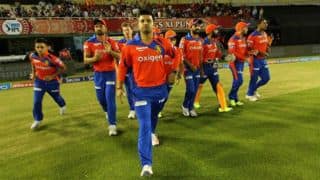