Mumbai: Mumbai have been at their dominating best against Uttarakhand in the quarterfinal of the ongoing Ranji Trophy. The 41-time champions have scored more than 600 runs in their first innings and youngster Suved Parkar played a huge role in it as he created an incredible record to join an elite list of cricket players.

Suved Parkar – coming in for the team for injured Ajinkya Rahane – scored 252 runs in 447 balls and became only the 12th Indian batsman to mark his first class debut with a double hundred.

Suved Parkar came to bat at the fourth spot and achieved the incredible milestone in the second session on Day 2 of the match. He drove left-arm spinner Swapnil Singh for a single to long-off to complete the double century. The middle-order batsman achieved the record on the 375th ball of his inning. He hit a total of 21 fours and four sixes to register the best performance of his career.

The 21-year-old was batting on 104 at the end of the first day’s play. He continued his good form on the following day. Suved Parkar played as a second fiddle to Sarfaraz Khan at the start of the day and then took charge himself. He hit the ball with sheer confidence to complete an incredible inning.

Amol Muzumdar was the only player from Mumbai before Suved Parkar to score a double century on his first class debut. Interestingly, he was present in Mumbai’s dugout when Suved Parkar scored his double ton. Muzumdar is currently the head coach of the Mumbai Ranji Team.

Suved Parkar comes from Swami Vivekanand International School which is also the alma matter of Rohit Sharma. The youngster learned a lot from Dinesh Lad and played many wonderful knocks in different local and age-group cricket. 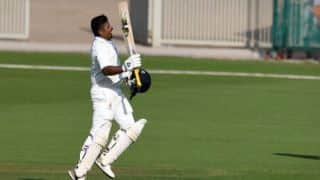 Sarfaraz Khan Creates History, Becomes Only Player To Score All His 1st 7 First-Class Tons In Excess Of 150