Murali Kartik calls time on cricket; retires from all forms of the game

Murali Kartik calls time on cricket; retires from all forms of the game

Former Indian Left-arm spinner Murali Kartik has retired from all forms of cricket at the age of 37. The Tamil Nadu tweaker played 8 Tests, 37 One-Day Internationals (ODI) and a solitary T20 International (T20I) in his 17 year-old career. Despite his excellent abilities with the ball, Kartik got limited chances for India as Anil Kumble and Harbhajan Singh were India’s preferred spin bowling options. Later in his career, Kartik saw youngsters like Pragyan Ojha, Amit Mishra and to a lesser degree, Piyush Chawla take the second-spinner’s spot.

Kartik had been a journeyman cricketer and despite his limited opportunities, he made use of his chances unflinchingly and was a captain’s dream with a fiercely combative attitude and a will to win. It is exactly the kind of fire in the belly that saw him have frequent run-ins with opponents and was a part of a ‘Mankading’ storm while playing for Railways against Bengal in the 2013-14 Ranji Trophy season.

Kartik’s drawing room would be adorned with silverware won all over the world. Baroda rode on the spinner’s performances en route to their first triumph in 2001/02 domestic season. Australia would bring the best out of him at international level and two match-winning performances in Tests and ODIs saw Kartik’s wizardry with the ball in full cry.

First, it was Kartik’s seven-wicket match haul in the infamous low-scoring ‘dustbowl’ Test match in Mumbai, which India won and an all round display in a dead-rubber ODI in 2007. Kartik’s bamboozled the Aussies and finished with figures of  six for 27 and was involved in a gritty partnership with Zaheer Khan to take India over the finish line while chasing. With years of experience in county cricket, Murali Kartik is a respected figure in English cricket circles and certainly opened doors for Indians to make a mark in the Old Blighty. With Middlesex, he won the Natwest T20 Championships in 2008. 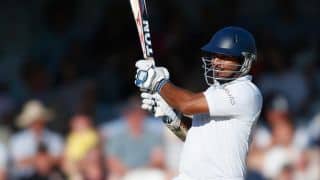