A win for Bangladesh at last. A win after eight encounters and it was their first against India in the shortest format.

Mushfiqur Rahim singlehandedly powered Bangladesh to their maiden T20I win over India with an unbeaten 60 off 43 balls, choking the fancied hosts in the smog-hit series opener on Sunday.

As cricket took centre stage despite severe pollution, Bangladesh negotiated the pitch much better than India, who made 148 for six on a sticky surface.

The Indian batsmen appeared over-cautious after being invited to bat as the young brigade disappointed the 25,000 strong fans, who braved severe smog to pack the Feroz Shah Kotla ground.

Chasing 149, Bangladesh overhauled the target with three balls to spare to record their first-ever win against India in nine meetings.

With Bangladesh needing 22 off the last 12 balls, Rahim (60 not out off 43) smashed four boundaries off as many balls in the penultimate over bowled by Khaleel Ahmed to tilt the game in his team’s favour.

He and Soumya Sarkar (39 off 35 balls) added 60 runs for the third wicket to steer Bangladesh closer to victory. The second T20 will be played in Rajkot on Thursday.

After Khaleel cleaned up Sarkar, Rahim was dropped by Krunal Pandya off Chahal when the batsman was on 38.

Leg-spinner Yuzvendra Chahal tested the Bangladesh batsmen with his variations but Naim and Sarkar played smartly, keeping the scoreboard ticking.

Naim, considered Bangladesh’s future star, went after Chahal but ended up giving an easy catch to Shikhar Dhawan at long-on.

The strategy of working the ball around rather than playing aggressively worked wonders for the visitors.

Rahim would have been back in the pavilion had India taken review in the 10th over. Chahal’s appeal for an lbw was turned down and replays showed that he was out.

Sarkar swung his arm to produce a massive six off Krunal Pandya as Bangladesh began the push for the win.

There were no demons in the wicket though the odd ball was gripping the surface. None of the Indian batsmen could play a substantial knock after being put in to bat.

At the top, after skipper Rohit Sharma’s early dismissal, Shikhar Dhawan scored at a slow pace, managing just 41 off 42 balls.

Dhawan, who has been struggling to find his touch since his comeback, was the top scorer for India but he consumed seven overs before running himself out and it affected the team’s scoring rate.

Being the senior-most player in the middle after Rohit’s dismissal, he needed to stay long at the wicket but took too many balls to score his runs.

Much was expected from India’s young brigade but save Shreyas Iyer, none took the attack by the scruff of its neck.

Had it not been for some gritty stroke-making by Washington Sundar (14 off 5 balls) and Krunal Pandya (15 off 8 balls), India would not have got close to the 150-run mark.

India skipper Rohit, playing his 99th T20I, began by glancing the first delivery from Shafiul to the boundary ropes and also cover drove the paceman for another four as the hosts made a flying start.

However, Islam cut short Rohit’s stay by trapping him before the wicket on the fifth ball. 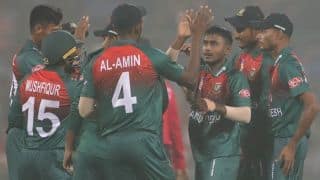 India vs Bangladesh, Delhi T20I : Pollution is not an issue for me: Mushfiqur Rahim after Bangladesh beat India