Mustafizur Rahman is not ready to put his foot down, wants to learn more despite success in IPL 2016

Dhaka: Bangladesh’s bowling sensation Mustafizur Rahman has said his feet are still on the ground despite earning all-round praise for his impressive bowling in the recent Indian Premier League (IPL). He returned to Bangladesh on Monday after a successful IPL campaign, reports bdnews24.com. The 20-year-old was accorded a raucous reception in Shahjalal International Airport. “I am still young. I want to learn more. There were many players from many countries in the IPL…I’ll try to give something better if I get a chance next time,” he said at the airport. Mustafizur said his playing in the English county cricket for Sussex now depends on Bangladesh Cricket Board physician’s report after the injury he had sustained in the IPL. ALSO READ: IPL 2016: “Elder brother” Virat Kohli is an inspiration, says Mustafizur Rahman

“I felt a little pain in my leg before the final match. I’ll go and visit the physio and speak to the cricket board (Tuesday). Things be known then,” he said. He said he missed his parents most during the IPL stint. “I missed everyone, the country in India.” The whippy left-armer also said he could not learn much English in India because everyone wanted to learn Bangla from him instead.

“Everyone praises me. I know some cricket language though,” he said. Deputy Minister for Youth and Sport Arif Khan Joy and BCB CEO Nizam Uddin Chowdhury welcomed him back at the airport. His uncles came to take him home. Mustafizur claimed the Emerging Player of the IPL award for his efforts. He snared a total of 17 wickets from 16 matches at a remarkable economy rate of 6.90 – the lowest among bowlers who bowled at least 20 overs in the tournament. 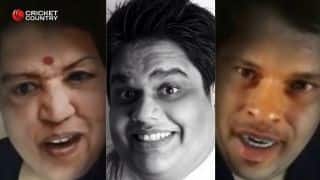