Muralitharan stated that it is up to the players to keep working hard with respect to becoming 'strong in the mind' to deal with failures.

Former Sri Lanka spinner Muttiah Muralitharan feels if a player isn’t able to deal with the mental side of the game then it’s difficult to make it big despite technique being immaculate. Muralitharan, who is the highest wicket-taker in both Tests and ODIs, also talked about the competitive nature of modern-day sports and the pressure that tags along with it.

“In any game, 90 per cent of the work is to be tactically and mentally fit. Only then can you play. When you are young, you won’t immediately think about that (being mentally fit) because of your interest and love for the game,” Muralitharan said on Star Sports 1 Tamil show Mind Masters by MFORE.

“Automatically, without being told, you’ll think about what to do and do it. But when you get into the professional level, it’s totally a mental game because of the pressure.

“A lot of cricketers who have good technique and haven’t dealt with this pressure, have fallen off. So, the mental aspect is more important in any sport, not just cricket.”

Bangladesh coach Russell Domingo recently spoke about creating an environment where players can openly talk about their mental struggles. Muralitharan, however, stated that it is up to the players to keep working hard with respect to becoming ‘strong in the mind’ to deal with failures.

“The mind is the most important in professional sport. While one can practice & train hard and hone one’s technical skills, it’s critical to keep working to become strong in the mind,” the legendary tweaker said.

“For there will be failures, one may fail to play a shot he always backs himself to, one may not be able to bowl a ball he usually delivers, but if you keep persevering at it and keep practicing don’t give up and importantly keep believing that you can do it definitely you will succeed.”

Muralitharan himself faced so much difficulties with his bowling action during his early years. Former umpire Darell Hair called no-ball seven times during a match because of his action on the 1995-96 tour of Australia. Despite such lows on the field, Muralitharan ended up scalping 800 and 534 wickets in Tests and ODIs respectively.

“I used to bowl leg spin also when I was young, so I thought in case I went for tests on my action and then it doesn’t work, I’d become a leg spinner,” Muralitharan said.

“As for everything, even when you play cricket you should have plan A & plan B. You can’t just stick to one plan. Same with any sport.

“Anyday you can face a failure in your life or sport, failure is guaranteed, you will need to think about it and take it positively and move on saying tomorrow is another day.” 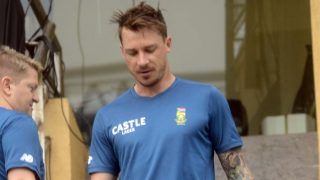