Birthday boy Rashid Khan capped off a memorable night at the Sheikh Zayed Stadium with an all-round performance that helped Afghanistan end the group stage unbeaten.

Birthday boy Rashid Khan capped off a memorable night at the Sheikh Zayed Stadium with an all-round performance that helped Afghanistan end the group stage unbeaten. He struck a quickfire half-century, returned figures of 2/13 and then effected a run-out off his own bowling as Afghanistan outclassed Bangladesh by 136 runs.

That Afghanistan were able to post what turned out to be a winning total was largely thanks to Rashid and his unbeaten stand of 95 runs with Gulbadin Naib for the eighth wicket. From 161/7 in 41 overs, Afghanistan were lifted to 255/7.

Rashid struck eight fours and a six during his unbeaten innings of 57 while Naib’s 42 not out featured five fours. “I am really happy with my performance and the best thing was I performed with both bat and ball,” Rashid said after receiving his man-of-the-match award. “My main focus was to bat till the end and I think our preparation was good to play till the end.”

One of the noticeable strategy from Afghanistan has been to introduce Rashid late into the attack. Against Sri Lanka, he was held back before coming on to bowl the 20th over. On Friday too, even after bangladesh had lost four wickets by the 15th over, he did not bowl before the 22nd over.

When asked the reason behind that, Rashid said, “I’ve been coming on to bowl late because I want to build pressure by bowling more dot balls and (force) the batsmen to give their wickets.”

Rashid, who turned 20 on Friday, was all praise for Afghanistan’s fielding saying the team has been working hard on that front. “Our fielding was amazing and the conditions were really hard and tough. We’ve been working hard on our fielding. It’s about luck in batting and bowling but fielding is one thing that is totally in our hands and we want to get better (in that aspect),” he said.

Rashid dedicated his man-of-the-match award to former Afghanistan Cricket Board (ACB) chairman Atif Mashal who has resigned from the post. He reportedly is being assigned a new role by the Afghanistan government. “I want to dedicate this award to our ex-board chairman Atif Mashal who has done a wonderful job for us in the last few years,” Rashid said. 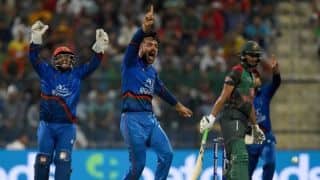