Yuvraj not only realised his father's dreams of playing cricket at the highest level but also achieved huge success during his 17-year long international career.

Yuvraj Singh Monday said he has made peace with his father Yograj, who has been like a “dragon” to him and nearly ended up antagonising the captain under whom his son batted and bowled India to a World Cup triumph.

Yuvraj’s relationship with his father has been far from perfect but just before he decided to call it quits from international and first-class cricket, the batting allrounder said he has managed to “achieve a closure” with him.

“I actually made peace with it a couple of days ago when I was talking about it to my father. I spoke to him, demons inside as young kid came out and that conversation happened with him and he came with his side of the story. And it was a very peaceful moment for me to have that closure and have that chat with him, because I had never had that chat with him in the last 20 years,” Yuvraj said.

“He’s always been like a dragon to me and just facing the dragon was a very difficult task for me,” he added after announcing his retirement.

Yograj, who has played one Test and 6 ODIs for India, never allowed Yuvraj to play any other sport other than cricket, and eventually, the left-handed batsman started playing the game, and relishing it too.

Yuvraj not only realised his father’s dreams of playing cricket at the highest level but also achieved huge success during his 17-year long international career.

“I have had closure with him. He never appreciated me playing any other sport which always started from when I was a young kid. He appreciated when I played cricket and (I was like) so be it and luckily for me later in my career I started enjoying it and made something good of it.

“And it was beautiful moment talking to my father, mother, family about my journey and I was looking for closure and today is a perfect day,” said the 37-year-old.

Yograj has time and again given statements against Yuvraj’s then skipper Mahendra Singh Dhoni, compared him with Raavan, blamed him for his ouster from the team besides stating that the former India captain never liked his son.

“He has always been a driving force to me as you saw (in the video), just confessing that the driving was a difficult time. My father and I have a very different relationship now, we both have grown up – I have grown up, I don’t know about him. All his life he has taken off on me in the media, now it’s my turn. I don’t know when he is going to grow up,” said Yuvraj.

Yuvraj said his father, who was not present at the press conference here, is satisfied with his journey.

“I was speaking to my wife and mother since two years that I want to retire and move on in life. Mentally I was not happy, after playing international cricket for so many years, going back and playing domestic cricket was bit of a struggle. 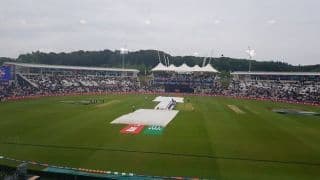