‘My heart sank when I was caught behind,’ says Fakhar Zaman on Jasprit Bumrah’s no-ball in Champions Trophy Final

‘My heart sank when I was caught behind,’ says Fakhar Zaman on Jasprit Bumrah’s no-ball in Champions Troph

Zaman, who had already scored 31, 50 and 57 in this first three ODIs, had a great chance to score at the biggest stage against India and there he was, out for a mere three. But as it turned out, it was a no-ball and the rest is history.

Opener Fakhar Zaman, playing the biggest match of his short career, emerged as a national hero when he slammed 106-ball 114 against arch-rivals India in the final of ICC Champions Trophy 2017. His knock propelled Pakistan to 180-run win as well as the Champions Trophy title, their first ever. Batting first, it was his knock that guided Pakistan to a massive 338 for 4. However, Zaman had luck on his side. When he was batting on 3, he was caught behind off Jasprit Bumrah s bowling. However, luckily for him as well as Pakistan, it turned out to be a no-ball. Zaman survived and the rest, as they say, is history.

Bumrah s no-ball has since been mocked at on social media as well as by Jaipur Police, prompting the bowler to hit back at them. However, it is not about Bumrah here, but about Zaman, who recently opened up on that lucky escape, saying how his heart sank when he edged that delivery to MS Dhoni. When I was caught behind, my heart sank, he said as quoted by Tribune. I was stunned and slowly started making my way back to the dressing room with all my hopes and dreams crushed. I kept thinking how could I lose my wicket here, I was supposed to score big, not get out on 3, he added.

Zaman, who had already scored 31, 50 and 57 in this first three ODIs, had a great chance to score at the biggest stage against India and there he was, out for a mere three. I had many plans in my mind for the final against India. I went out with the mindset that I will be doing my best in this match and will help Pakistan win the match. A Pakistan-India game is a stage where if you do well, you ll be hero, he said. I was playing my first match against India so I had to do more than the others, and my consistent performances before that game meant the team was relying on me, he added.

But the moment he learnt it was a no-ball, Zaman had a huge sigh of relief. From there on, he took a fresh guard and faced the Indian bowlers with the same confidence. I just went hard after their bowlers like I do in domestic and club cricket. I was given a lot of confidence by my teammates, especially by skipper Sarfraz Ahmed, veteran Shoaib Malik and opening partner Azhar Ali, he said.

Zaman also said there was no animosity between the two teams and the players. On the day we played good cricket and we did not consider them as our enemies but instead the best team to play your best cricket against, he said. India s players also played cricket with great spirit and I hope the match helps develop goodwill between the two nations, he concluded. 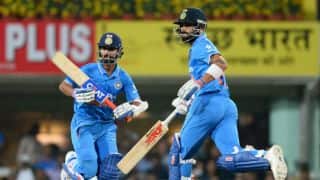