Angelo Mathews is still disappointed at being dropped from Sri Lanka's ODI squad.

Sri Lanka‘s disastrous campaign at the 2018 Asia Cup had a high-profile fallout. Angelo Mathews was asked to step down from the ODI captaincy and also dropped from the bilateral ODI series against England as well.

Fitness was pointed out as the main reason for him being shown the door. It’s another matter that since 2017, Mathews has been the most consistent batsman for Sri Lanka, scoring 888 runs in 23 ODIs.

The 31-year-old didn’t accept the sacking quietly, claiming he was made the ‘scapegoat’ for a shoddy show that saw Sri Lanka exiting Asia Cup in the first round itself after losing to Afghanistan and Bangladesh.

However, he has been scoring runs in the longest format and in the ongoing Test series against England, has scored three fifties across four innings so far. His 88 in the second innings in Pallekele was vital in bringing Sri Lanka closer to the target of 301 runs as they seek to draw level in the three-match series.

“My job is to score runs and not worry about other things. Just focus on the game and move forward and not to worry about what other people are saying. If I am honest with myself and If I am doing the thing, that’s what matters. My stats will speak on behalf of me. But they took a decision. I’m disappointed but I can’t control it,” Mathews was quoted as saying by ESPNcricinfo on Saturday.

Questions have been raised over his match fitness, especially running between the wickets. When asked whether he’s happy with his fitness level, Mathews replied, “You tell me. That’s not something that I have told. But people are concerned, and they need to answer that question.”

“I have done nothing extraordinary when it comes to preparation. I have been training the same way for the past ten years. I must thank the high performance centre staff and all the coaches, and the physios and trainers and everyone for providing me all the facilities and looking after me well. I concentrated on what I need to do. I didn’t concentrate on other things. I prepared myself like I have always prepared. If I get the opportunity I want to score runs,” he said. 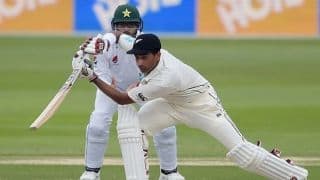