N Srinivasan, who had sidestepped as the Board for Control of Cricket in India‘s (BCCI) head, making room for the appointment of legendary cricketer Sunil Gavaskar as the Indian cricketing body’s interim president tasked with the conduct of the Indian Premier League (IPL)7, moved to the apex court seeking his restoration.

Srinivasan has contested the appointment of Gavaskar as BCCI interim president, saying that there was nothing in the  rules that envisages such a position.

Seeking the reconsideration of apex court’s March 28 order, Srinivasan, in his application, said, “I wish to resume my elected office. My term ends with September 2014 and I should be allowed to complete my tenure.”

Under a cloud over allegations of betting by his son-in-law Gurunath Meiyappan and other allegations of conflict of interest, in his application, Srinivasan said, “Memorandum of Rules and Regulations of the BCCI do not contemplate an interim president.”

Srinivasan said that he had offered to “side step from my position as BCCI president, till an independent investigation was completed” but “now the circumstances are quite different. In that it clearly appears to me that the only unsubstantiated allegations made by G.Sampath Kumar (police officer of Tamil Nadu) …contributed to the severe comment made by this court” March 25.

“Hence I wish to assume office as president, BCCI as there is no reason at all why I should step aside, pending any investigation into any crime being investigated by CB-CID (Crime Branch-CID) or other agency.”

Srinivasan, in his application, said that even though March 28 order passed by the apex court bench of Justice A.K. Patnaik and Justice Fakkir Mohamed Ibrahim Kalifulla had said that its interim order was restricted to BCCI activities only but the “vested interests behind the petitioner (Cricket Association of Bihar) have charged me with violating this court’s order by attending the ICC meetings in Dubai last week”.

Srinivasan also said that Justice (retd.) Mukul Mudgal Committee report quoting him as saying that Meiyappan was a “mere cricket enthusiast” was incorrect as he was the public face of the Chennai Super Kings.

He said that the Mudgal Committee went beyond the scope of the its terms of reference and persons “inimical” to him like A.C. Muthiah and I.D.Bindra interacted with the Committee.

“It would be most unfair if such statements of the people (Muthiah and Bindra) who have an axe to grind, form the basis of comments made against me in the (Mudgal) report,” Srinivasan said in his application.

Referring to the apex court order barring all the staffers of India Cement from operating in the BCCI, Srinivasan defended those employees of the India Cement’s employees saying that they had worked under various officer bearers starting with Lalit Modi, Sharad Pawar and others.

“These persons have been asked to leave the BCCI for absolutely for no fault of their making, without giving them, or for that matter, me an opportunity to explain” the allegations.

“Today, these employees of India Cements Ltd. stand tarnished in the eyes of the public and the society at the large as if they were unceremoniously thrown out by the (apex) court upon being found guilty of conspiring against the interest of the BCCI,” Srinivasan said in his application. 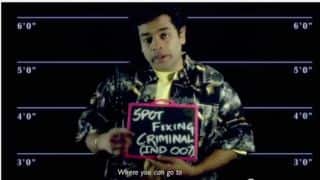