"If I can hopefully share my experiences, that can help turn their learning around quicker."

England, 4-0 up in the ODI series against Australia, are one win away from a whitewash. The Australian bowlers have been on the receiving end, being hammered by the England batsmen. England have till now posted totals of 342, 481 for 6 (a world record ODI score), and 314 for 4 in the series. Talking on the same, Nathan Lyon says this would be a good learning for bowlers before the World Cup.

“I think it’s been a great learning curve and opportunity for all the bowlers,” Lyon said in Manchester on June 23. “It’s been great for them to learn to perform under pressure because playing in a World Cup — what I want to do, what everyone else in this squad wants to do — that’s what you’re going to come up against, being under pressure. To compete and perform under pressure, that’s the biggest thing,” he added.

Australia missed some key players in the series. Steven Smith and David Warner are serving a ban, while Mitchell Starc, Josh Hazlewood and Pat Cummins are out due to injuries. This has given chance to young and inexperienced side of Australia. Lyon and Ashton Agar have also managed to pick 4 wickets between them.

“If I can hopefully share my experiences, that can help turn their learning around quicker. I’ve been able to sit down with Ashton and Travis [Head] and D’Arcy Short and Maxi [Glenn Maxwell] and just talk about spin bowling. It probably has been a big mentoring role in that side of things. I’ve enjoyed doing that part of it, and I feel like it helps my game as well, talking about spin bowling,” Lyon concluded. 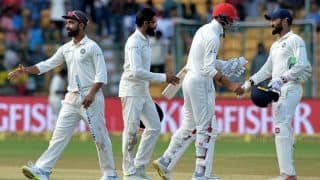