Claiming 22 wickets in the 2-match Test series against Bangladesh, Nathan Lyon has lowered his career average to 31.84.

Claiming 22 wickets in the 2-match Test series against Bangladesh, Nathan Lyon has lowered his career average to 31.84. Before the tournament, Lyon was averaging above 34. Lyon has always been a hit Down Under. With these impressive figures, breaking several records and taking away the Man of the Match as well as sharing the Man of the Series award along with teammate David Warner, Lyon rates the performance against Bangladesh as one of the greatest achievements of his career. On Thursday, Lyon proved to be the key catalyst in helping Australia level the series.

Lyon’s success in the subcontinent began from the India series. He continued the momentum against Bangladesh in what was a testimony to a phenomenal sub-continental season for the 29-year old. Addressing the reporters post match, Lyon was delighted to end the series on a high, “Definitely. It is probably up there, personally. But sitting down with the skipper in Darwin, and obviously, before these Test matches, he put a big onus on me to take control of the ball. And if I’d kept bowling the way I’ve been bowling in the nets I’d hopefully be successful. So I’m very happy with the way the ball’s been coming out in the nets. Bowling to these guys in the nets, there’s no better practice.”

Lyon was not just happy contributing to the team’s success but also praised his counterparts for the support, “To take 22 wickets in a two-match series, it’s a pretty big achievement personally. But as I said, I don’t do that without the other guys putting in at the other end, like Patty Cummins bowling well, Ashton Agar, Steve O’Keefe and even Hilton Cartwright in this game. So without the support of those guys and the skipper, it’s pretty hard to go out and have personal success. So I’m very pleased but very thankful as well.” 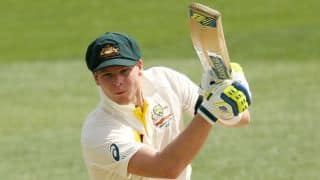