Lyon who made his debut with a brilliant 6-wicket-haul in Sri Lanka in 2011, has proved to be Australia s go-to spinner in Tests in recent past. His 3-wicket-haul helped Australia bundle Bangladesh for 260. It was Pat Cummins who primarily unsettled the Bangladesh top-order and then Glenn Maxwell, Lyon and Ashton Agar got rid of rest of the batting. Only two cricketers managed to score half-centuries. However, despite impressive performance with the ball, Australia end the day under pressure, losing their top three batsmen for 18 runs on the board.

Mehedi Hasan got the team their first breakthrough, while the second dismissal was a run out. Shakib Al Hasan removed the third Australian to cause further damage to the visitors. Australia trail by 242 runs at stumps of Day One with Steven Smith and Matt Renshaw unbeaten. 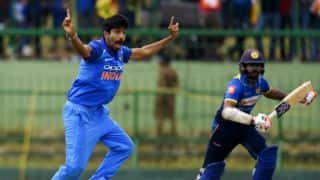