The incident occurred during the 4th over of the West Indies' innings when Saini took the wicket of wicketkeeper-batsman Nicholas Pooran.

India pacer Navdeep Saini has been handed one demerit point for breaching ICC’s code of conduct during India’s 4-wicket win over West Indies in the st T20I on Saturday at Lauderhill, Florida.

“Saini was found to have breached Article 2.5 of the ICC Code of Conduct for Players and Player Support Personnel, which relates to using actions or gestures which could provoke an aggressive reaction from a batter upon their dismissal. He has also been handed one demerit point,” read an ICC statement on Monday.

The incident occurred during the 4th over of the West Indies’ innings when Saini took the wicket of wicketkeeper-batsman Nicholas Pooran. ALSO READ: Navdeep Saini is outstanding but I don’t’ have to stoop to conquer like Gautam Gambhir: Bishan Singh Bedi

“The player admitted the offence and accepted the sanction proposed by match referee Jeff Crowe of the Emirates Elite Panel of ICC Match Referees and, as such, there was no need for a formal hearing,” the released further added.

Saini, on debut, went on to finish with 3/17 in his four overs. India claimed a tough victory, chasing a target of 96 with 16 balls to spare. A day later, India sealed the three-match T20I series with a 22-run win (DLS), in which the 26-year-old went wicketless. ALSO READ: Could not believe that today is the day which I was waiting for: Navdeep Saini on receiving India cap

When a player reaches four or more demerit points within a 24-month period, they are converted into suspension points and a player is banned. Two suspension points equate to a ban from one Test or two ODIs or two T20Is, whatever comes first for the player. Demerit Points to remain on a Player or Player Support Personnel’s disciplinary record for a period of twenty-four (24) months from their imposition following which they will be expunged. 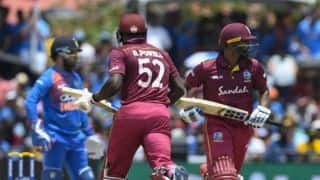 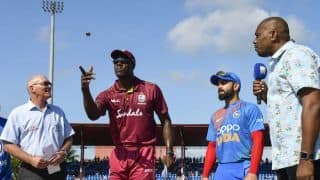