Netherlands were bowled out for 39, recording the lowest T20I score.

Netherlands were truly blown away by the Sri Lankan juggernaut in their ICC World T20 2014 clash at Chittagong. Netherlands came into the Super-10s with a lot of hope. After all, they scripted the most remarkable run-chase against Ireland to get here. But, they were humbled by a superior attack as they were bundled out for a paltry 39. Sri Lanka reached home in only five overs.

Sri Lanka now have bowled their oppositions out for the lowest T20 International and One-Day International (ODI) totals. Plus, they have scored the highest totals in Tests, T20I and ODIs. Netherlands’ score of 39 is the second lowest score in T20 cricket, behind Tripura’s 30 against Maharashtra in Indian domestic cricket.

At the beginning of the game, one would have felt that Lasith Malinga and Ajantha Mendis would be used. But then Dinesh Chandimal chose to start with Nuwan Kulasekara and Angelo Mathews after choosing to bowl first. Kulasekara struck in the first over as Stephan Myburgh cut one into the hands of third-man. Later Angelo Mathews dismissed Michael Swartz and Wesley Barresi off consecutive deliveries in the second over. He had to wait for his hat-trick ball though as there was a power outage. Peter Borren let it go through.

However, Netherlands just kept slipping from there. Once Tom Cooper was dismissed leg-before for 16 with the score on 33 for six in ninth over, Netherlands did not take time to be bowled out for 39. Malinga and Mendis then came around to finish the innings.

Kusal Perera was hit on the thumb first ball and it nearly ballooned to point. The second ball was also a possible chance as Perera hit it short of extra cover. Those were the only ‘nervy moments’ one may say. Although Perera was dismissed for 14, Sri Lanka sailed home to record a nine-wicket victory.

With their second consecutive victory at the ICC World T20 2014, Sri Lanka have strengthened their net run rate with this big win. This should help them later in the tournament, if need be. 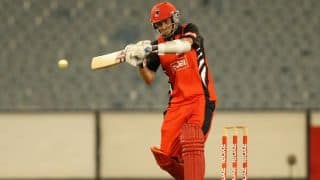