Buoyant Netherlands take on the big boys, New Zealand in this Group 1 encounter.

(New Zealand clash with Netherlands in the ICC World T20 2014 at Chittagong on March 29. Catch Live Cricket Score of the match in our updates below).

New Zealand captain Brendon McCullum is the Man of the Match for his 65 runs off 45 deliveries. He struck four fours and three sixes in his innings. That is it from us for this match. Hope you enjoyed our coverage. Have a great day!
New Zealand 152/4 Overs 19
C Anderson 20(14), J Neesham 7(7)
Bukhari also to bowl his final over. Neesham and Anderson get singles off the first two deliveries in the over. Neesham then gets two runs towards wide long-on. Neesham then pushes one towards wide long-on and gets two more runs. Those are the winning runs. New Zealand beat the Netherlands by six wickets.
New Zealand 145/4 Overs 18
C Anderson 19(13), J Neesham 2(2)
Malik to bowl his last over. Anderson smashes a length delivery high over deep mid-wicket for a six. The batsmen then exchange singles of the next four deliveries.

McCullum goes with 18 needed from 19

New Zealand 135/4 Overs 17
C Anderson 11(9), J Neesham 0(0)
Van der Gugten is back into the attack. Anderson drives a full delivery towards long-off for a single. McCullum then pulls a back of a length delivery for a six over deep backward square-leg. McCullum then comes down the track. Van der Gugten follows him, but McCullum manages to cut it away behind point and gets a four. McCullum then hits one high in the air and Bukharis takes a brilliant catch coming in from deep extra-cover. James Neesham is the next batsman in.
OUT! B McCullum 65(45)

New Zealand 123/3 Overs 16
B McCullum 55(41), C Anderson 9(7)
Malik continues. McCullum comes down the track and hits a good length delivery over long-off for a six. That brings up his 13th half-century in T20Is. Anderson then flat-bats a slower length delivery past the bowler for a four towards long-on.
New Zealand 107/3 Overs 15
B McCullum 44(37), C Anderson 4(5)
Bukhari comes in. He bowls a low full-toss and McCullum flicks it away over deep backward square-leg for a six. There was a fielder there, but it went just over him. That brings up the 100 for New Zealand.
New Zealand 96/3 Overs 14
B McCullum 35(32), C Anderson 3(4)
Malik to bowl. He continues his strategy of bowling from round the wicket to right-handed batsmen. He comes from over the wicket to the left-handed Anderson though. He bowls two brilliant slower deliveries to Anderson as he beats the bat on both occasions. Anderson does get of the mark with two runs towards long-off. Anderson then walks down the pitch and hits one over extra-cover for a single. McCullum then paddle sweeps a full delivery towards fine-leg for a single.
New Zealand 91/3 Overs 13
B McCullum 33(30), C Anderson 0(0)
Van der Gugten is back. Taylor launches a length delivery over deep mid-wicket for a six. Taylor then top-edges a hoick and Barresi takes the catch at long-leg. Corey Anderson is the next batsman in.
OUT! R Taylor 18(11)
New Zealand 82/2 Overs 12
B McCullum 30(26), R Taylor 12(9)
Seelaar comes back into the attack. He tosses one up and McCullum drives through cover for a four.

The Netherlands finish on 151-4 v NZ. They should probably have got about 20 more…

Netherlands 142/4 Overs 20
T Cooper 40(23), B Cooper 1(6)
Boult to bowl the last over of the innings. Ben Cooper gets of the mark with a single towards point. Tom then drives a full and wide delivery through point for a four. The Netherlands get to their 150 finally. But they only manage 151 for four in the end.

Truly terrible over for the Dutch, 1 from it. Six balls to go

Netherlands 142/4 Overs 19
T Cooper 34(18), B Cooper 0(5)
Ben Cooper joins his brother Tom. Neesham continues. He bowls two wide deliveries on the off side to the left-handed Ben, but the umpire doesn’t call either for a wide. Then Neesham bowls one down the leg side and still the umpire doesn’t call it a wide. Poor umpiring that.
Netherlands 141/4 Overs 18
T Cooper 33(17)
Mills comes back. Borren goes down on one knee and flicks a sweep over square-leg for a four. That brings up the 50-run partnership between Borren and Tom Cooper. Mills bowls a slower delivery and Cooper hits it over long-on for a six. Borren then gets his bat on a wide yorker and Williamson takes the catch at point. He deserved a half-century.
OUT! P Borren 49(35)
Netherlands 129/3 Overs 17
P Borren 44(32), T Cooper 26(14)
James Neesham has been brought into the attack. That is surprising, because he is a front-line bowler as well. Tom Cooper upper cuts a wide delivery over backward-point for a four. Neehsam bowls a brilliant slower delivery from the back of the hand. Borren misses, but the ball is not on the stumps.
Netherlands 121/3 Overs 16
P Borren 42(28), T Cooper 20(12)
McClenaghan to bowl his last over. Tom Cooper pulls a back of a length delivery over square-leg for a four. Copper then swats a length delivery over deep mid-wicket for a six.
Netherlands 108/3 Overs 15
P Borren 42(27), T Cooper 8(7)
Kane Williamson comes into the attack. Borren comes down the track and lofts one over wide long-on for a six. Borren then opens the face of the bat to a short delivery and gets a four through third-man. The last ball is slog-swept by Borren for a four towards wide long-on.
Netherlands 91/3 Overs 14
P Borren 26(22), T Cooper 7(6)
McClenaghan comes back into the attack. He gives away only four runs in the over. The Netherlands need some big-hitting if they are to post a competitive total.
Netherlands 87/3 Overs 13
P Borren 25(18), T Cooper 5(4)
Nathan McCullum to bowl his final over. Swart comes down the ground and swings. He misses but Ronchi stumps him. Tom Cooper is next batsman in. He plays a reverse-sweep and gets four runs through third-man.
OUT! M Swart 26(26)

Netherlands 81/2 Overs 12
M Swart 26(25), P Borren 24(17)
Andreson comes from round the wicket and Borren goes down on one knee and hits the ball in the air down the ground for a four. He again goes down on one knee and slog-sweeps one behind square on the leg side. He has not connected with it properly. Mills comes from long-leg and cannot catch it with a dive. The ball goes to the boundary for a four. Borren drives one through the covers for two runs. He then takes a quick single on the leg side. Anderson throws at the bowler’s end but misses with the direct hit and the batsmen get one run.
Netherlands 69/2 Overs 11
M Swart 25(24), P Borren 13(12)
Nathan McCullum to bowl. Borren comes down the track and lofts one over mid-wicket for a four. Borren again comes down the track and hits one hard straight back to the bowler. The ball comes close to Nathan’s head and he gets his hands to it, but is not able to collect it.
Netherlands 62/2 Overs 10
M Swart 24(22), P Borren 7(8)
McClenaghan continues. Borren drives a full delivery down the ground for a four. McClenaghan bowls ne on the pads and Swart works it towards mid-wicket and gets two runs. Good running from the batsmen. McClenaghan bowls a short delivery and Swart pulls it away for a four through deep square-leg for a four.
Netherlands 50/2 Overs 9
M Swart 18(20), P Borren 2(4)
Nathan McCullum comes in. Borren pushes one and takes off for a quick single. The throw is good, but Natha does not collect it and Borren crosses the line. Swart then tries to paddle sweep and misses. Ronchi also misses and the ball goes for four byes. Swart then hits one towards mid-wicket. Brendon McCullum dives full-length to his right at short mid-wicket but does not collect the ball. The 50 comes up for the Netherlands in this over.
Netherlands 42/2 Overs 8
M Swart 16(16), P Borren 0(2)
Mitchell McClenaghan has been brought into the attack. He is a left-arm fast-medium bowler. A lot of left-handed bowlers in this New Zealand team. McClenaghan angles one across Barresi and he edges it to Luke Ronchi behind the stumps.
OUT! W Barresi 4(8)

Nathan McCullum comes into the attack, looking to add to his 50 T20 wickets so far! #wt20 ^CE

Netherlands 40/1 Overs 7
M Swart 15(14), W Barresi 3(6)
Nathan McCullum comes into the attack. He is a right-arm off-spinner. The batsmen exchange a few singles in the over. McCullum runs through his over.
Netherlands 37/1 Overs 6
M Swart 14(13), W Barresi 1(1)
Boult continues. Swart flicks a full delivery on middle-stump for a four through mid-wicket. Myburgh then pulls a short delivery towards deep backward square-leg. Martin Guptill takes a brilliant catch in the deep. The ball was well outside off-stump and Myburgh was never in control of that shot.
OUT! S Myburgh 16(23)
Netherlands 29/0 Overs 5
S Myburgh 16(22), M Swart 8(8)
Corey Anderson comes into the attack. He is a left-handed medium-fast bowler. He bowls five dot deliveries first up. But Anderson then bowls a wide down the leg side as one run is added. That allows Myburgh to swat a length delivery for a six over deep mid-wicket. Brilliant shot from the left-hander.
Netherlands 22/0 Overs 4
S Myburgh 10(16), M Swart 8(8)
Boult continues. Boult hits Myburgh’s pads and appeals. But the umpire says not out. Boult then bowls an in-swinger and Myburgh misses with a drive. The ball looks like it has touched the stumps while on the way to four byes. The bails did not come off.
Netherlands 14/0 Overs 3
S Myburgh 7(11), M Swart 7(7)
Mills comes in. It is a very good over from the experienced Mills. He only gives away three singles from it.
Netherlands 11/0 Overs 2
S Myburgh 6(7), M Swart 5(5)
Trent Boult will share the new ball with Mills. He bowls a short delivery and Swart pulls it away for a four over mid-wicket and gets of the mark.
Netherlands 5/0 Overs 1
S Myburgh 5(6), M Swart 0(0)
Stephan Myburgh and Michael Swart walk out into the middle for the Netherlands. Kyle Mills will begin proceedings for New Zealand. Myburgh gets of the mark with a cut through point for a four.

Toss: New Zealand captain Brendon McCullum wins toss and elects to bowl first. Trent Boult and James Neesham come in for Tim Southee and Colin Munro. Peter Borren will captain Netherlands. They are unchanged from the loss against South Africa.

Hello and welcome to the live updates of this Group 1 Super 10s clash in the ICC World T20 2014 between New Zealand and Netherlands at the Zahur Ahmed Chowdhury Stadium in Chittagong. New Zealand will be hoping to bounce back from their narrow defeat in the hands of South Africa, whereas Netherlands, who too missed out on causing the biggest upset of the tournament when they lost to the Proteas by mere six runs, will be looking to go all out and register a victory on a major team. I am Shrikant Shankar and will be bringing you all the live updates.

Overall, New Zealand will be hoping for a better performance from their bowlers, and some strong partnerships between their batsmen. Netherlands will be telling themselves, ‘Let’s go out there and do what we have done best so far. Play attacking cricket.’ 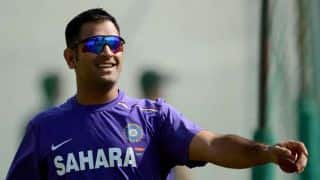 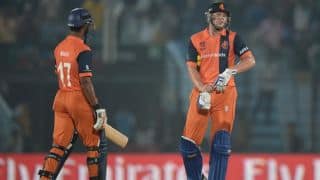