India dominated the first session on Day One of the first Test against New Zealand at Eden Park, Auckland on Thursday. Under pacer-friendly conditions, the Kiwis are struggling on 54 for three.

A green wicket coupled with overcast conditions are a nightmare for batsmen. Auckland had just the right conditions for the seamers to dominate. Luck was once again on MS Dhoni’s side winning his sixth toss in a row. The Indian skipper had no hesitation in opting to bowl. The Indians retained the same team which had played the Durban Tests against South Africa. This meant that Ishant Sharma once again retained his place in the side.

Even at the toss, Dhoni emphasised on the need to bowl fuller and extract the advantage from the fresh wicket.

Mohammed Shami and Zaheer Khan bowled a probing line to test the openers Hamish Rutherford and Peter Fulton. Zaheer could have got a breakthrough on his first ball of the tour when Fulton edged to second slip. Shikhar Dhawan at third slip dived and messed p the opportunity. Both the pacers tested the batsmen and stepped up the pressure. It was Ishant Sharma who benefited as Rutherford tried to punch away from the body and edged it to Ajinkya Rahane at gully. It was also Ishant’s 150th Test wicket.

The second wicket too wasn’t far away with Zaheer finally managing to trap Fulton leg-before for just six runs. The tall Fulton failed to get the bat down in time and the ball hit him plumb in front. The dismissal of the openers brought the in form pair of Kane Williamson and Ross Taylor together.

While Williamson continued his elegant touch, Taylor looked nervous and edgy trying to go for extravagant shots early on. He finally perished trying to drive a length delivery through mid-off. Ravindra Jadeja at that position took a sharp catch.

The pacers continued their relentless effort against skipper Brendon McCullum and Williamson. Few minutes before lunch, Dhoni opted for spin in the form of Jadeja. But post lunch Dhoni will once again bank on the pacers to make more inroads in to the Kiwi batting. It’s going to be an intriguing second session and India will look to wrestle control by targetting Williamson. 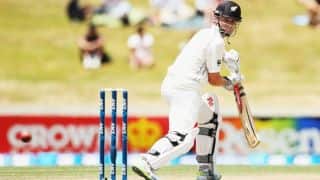