Four options from past Black Caps series have been chosen by NZC for fans to vote on.

Taking a cue from Cricket Australia, New Zealand Cricket (NZC) has announced their Black Caps cricket fans now have the chance to vote for their team s favourite retro kit for next summer.

Starting today, New Zealand cricket fans around the globe can vote their choice of kit from four options, as part of the #PickTheKit campaign similar to what Cricket Australia ran over the past few weeks, which resulted in Australian cricket lovers overwhelmingly choosing the 1999 World Cup-winning yellow and gold outfit for next summer’s Australia vs New Zealand series which includes ODIs and T20Is.

.@BLACKCAPS has announced a ‘Pick the Kit’ competition for next summer. The winning kit will be worn in trans-Tasman games next summer.

Four options from past Black Caps series have been chosen by NZC – the Beige of the 1980s, the Horizontal Hoop ensemble from 1990 which was worn in the lead-up to the 1992 World Cup, the Black Shouldered kit from 1993-94, and the Teal of the late 90s worn by the 1999 World Cup New Zealand team.

Fans can go to the Black Caps’ website and click on the link at the top of the homepage to vote.
First Published on
Last updated on March 8, 2019 11:43 AM IST
TOPICS:
Australia vs New Zealand 2019 Black Caps Blackcaps New Zealand New Zealand Cricket 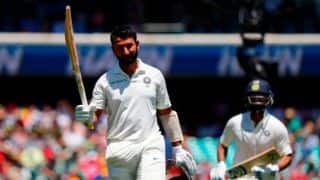