New Zealand defeated Somerset by 66 runs in the first warm-up match of the ongoing tour of England at the County Ground in Taunton on Monday. Chasing a target of 344, Somerset were bowled out for a score of 277 on the final day of the four-day game. Mark Craig (five for 34) and Doug Bracewell (three for 62) led the way among the New Zealand bowlers. READ: NZ not favourites against ENG, feels Mark Craig

Resuming from their overnight score of 142 for six, Somerset lost their first wicket of the day without adding any further runs as Josh Davey was trapped leg-before by Bracewell. James Hildreth, who was batting on 62 at stumps on Day Three, continued to fight despite the situation looking increasingly tense for his side. Hildreth added 72 runs for the eighth wicket with Craig Overton, who was then dismissed hit wicket after scoring 25 off 45 balls. READ: Martin Guptill scores maiden First-Class double-ton

Hildreth eventually brought up his century as a consolation for his team’s defeat. Tim Groenewald, who recorded figures of four for 71 and five for 65 respectively in the two New Zealand innings, was dismissed three runs short of a half-century by Craig. Groenewald hit five sixes and two fours in an entertaining stay at the crease, as he became the last man to fall in the Somerset innings. READ: Adam Milne likely to be sidelined during England Test series

New Zealand were earlier bowled out for a score of 310 in their second innings, with the uncapped Mitchell Santner top-scoring with 94 off 151 balls. Smashing 14 fours and a six during his innings, Santner formed a 124-run second-wicket partnership with opener Tom Latham (57 off 121 balls). A couple of quick wickets saw New Zealand being pushed on the back-foot momentarily, before BJ Watling (46) and Ben Wheeler (33) got the team past the 300-run mark.

New Zealand face Worcestershire in their next warm-up match starting May 14. The first Test against England at the Lord’s begins on May 21, with several key players such as Brendon McCullum and Trent Boult, who are currently playing in the Indian Premier League (IPL), expected to join the side. 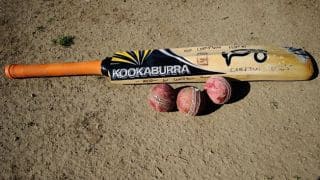