New Zealand’s Martin Guptill carried on where he left off at the World Cup by scoring a stunning maiden first-class double-century as Derbyshire took charge of their County Championship match away to Gloucestershire at Bristol on Monday. The 28-year-old Guptill struck 227 off just 176 balls, including 29 fours and 11 sixes. Martin Guptill rewarded with New Zealand Test call up after stellar World Cup performance

Guptill, dropped on 57, completed his double hundred in style with three successive sixes off Liam Norwell as Derbyshire piled up 511 for eight in reply to Gloucestershire’s 275 on the second day of the Second Division fixture. He was eventually dismissed when he struck a full toss from Matt Taylor to extra-cover. Online petition filed to award Knighthood to Martin Crowe

Last month, Guptill emerged as the leading run-scorer at the World Cup with 547 runs, including an unbeaten 237 against the West Indies—the highest individual score in the tournament’s 40-year-history—during co-hosts New Zealand’s quarter-final win in Wellington. Martin Guptill’s 105 and 237: Most runs from two consecutive ODI innings

But in New Zealand’s seven-wicket defeat by Australia in the final, he was out for 15. Guptill’s latest big innings has come just a week before the start of New Zealand’s two-Test tour of England, with the Auckland batsman recalled to the Test squad by the Black Caps for the first time since their last visit in 2013. Martin Guptill’s 237: more records 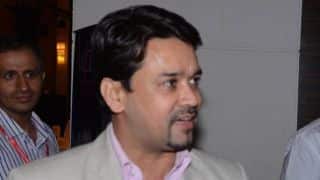