Bangladesh lost quick five wickets in the first session of Day Two of the second Test against New Zealand at Dhaka as the visitors rode high on Neil Wagner's five-for. 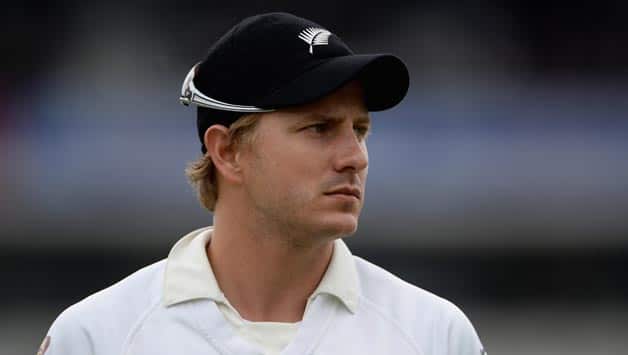 Bangladesh lost quick five wickets in the first session of Day Two of the second Test against New Zealand at Dhaka as the visitors rode high on Neil Wagner’s five-for.

Resuming at 228 for five, Bangladesh were all out for 282. Partnering Wagner at bowling was Ish Sodhi, who picked up three wickets giving away 59 runs.

New Zealand lost both of their openers. Hamish Rutherford coudln’t manage much as he was dismissed by Shakib Al Hasan. In the last over before lunch was called Shakib removed Peter Fulton.

Kane Williamson was unbeaten when lunch was called.

Earlier on Day One, rain forced early stumps as Bangladesh’s score of 228 for five at tea stayed as it is as the entire post-tea session was washed out.

After winning the toss and electing to bat, Bangladesh began positively despite the loss of Anamul Haque (7) early on. Tamim Iqbal and Marshall Ayub added 67 runs for the second wicket. Ayub struck six fours in his innings before he was dismissed for 41 off 62 balls. He was bowled by Neil Wagner.

Iqbal then put together a 76-run partnership with Mominul Haque for the third wicket. Mominul, who scored a century in the first Test at Chittagong, was dismissed on 47 off 59 balls by Corey Anderson. He scored eight fours.

Then Iqbal, who looked well-set for a fine century, edged a Wagner delivery to Kane Williamson, who took a splendid catch at gully. Iqbal had to depart for 153-ball 95. He struck 17 fours in his innings.