Kane Williamson will captain the young side in the T20s against Sri Lanka.

All-rounder Corey Anderson, who has been nursing a sore back ever since he contracted it on the tour of England, is set to make a comeback to the national side albeit only as a batsman. The southpaw is equally effective with bat and ball, but for the time-being will have to focus on his batting as he continues to get rehabilitated from the injury. He will play in the two match Twenty20 International (T20I) series against Sri Lanka. Anderson played as a specialist batsman in the domestic circuit with his regional team, the Northern Districts. ALSO READ: Lasith Malinga ruled out of T20I series against New Zealand, Dinesh Chandimal to lead

Mike Hesson, the New Zealand coach, is delighted to have Anderson back and is optimistic about his future. “It’s been a long process for Corey, but we’ve been happy with his recent progress and the fact he’s managed to string a few games together for the Knights,” he said as reported by stuff.co.nz.

“We’ve got a plan in place for when we hope to have Corey back bowling. He’s getting closer, but we’ll be taking a precautionary approach. We’ve seen how dynamic a batsmen he is and can threaten any bowling attack in the world. It’ll be great to have him back in the mix,” Hesson said.

New Zealand’s World Cup hero Grant Elliott is also to make his comeback in the T20 squad. The Wellington cricketer was on the sidelines since November after injuring his wrist while training for his domestic team. “We’re also looking forward to having Grant back with us after recovering from the from his arm injury. He brings a lot to the squad and obviously has experience in pressure moments, which is key to batting in the middle order in Twenty20.” 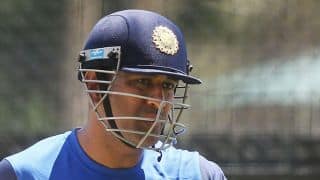