Ranked fourth in T20Is, Munro can take confidence from a bumper CPL for winners Trinbago Knight Riders as well as the recent APL T20.

New Zealand allrounder Colin Munro is aware of the huge challenge that faces the team as it wades into the T20I series against top-ranked Pakistan in its return to international cricket after six months, but feels they are quietly confident of success in the first leg of their UAE tour.

Sarfraz Ahmed s Pakistan just wrapped up their 10th successive T20I series win, beating Pakistan 3-0, to extend their record in the format this year to a stunning 14-2. New Zealand, conversely, have won three of 10 T20Is this year and were beaten 1-2 by Pakistan at the start of the year.

Munro understands well the challenge of playing the No 1 team in the UAE, but believes that New Zealand have enough players who have kept themselves busy during the home winter by playing county cricket and in T20 leagues to instil confidence in the squad.

It is big challenge in these conditions, especially with a few guys coming straight out of the winter, not playing a lot of cricket. Obviously those are excuses, so we ve got to go and play our brand of cricket and hopefully its good enough on the day, he told the Blackcaps website. Everyone is coming in with a bit of confidence, someone like Corey [Anderson] who hasn t played for the Blackcaps in a while, did well for Somerset this year. The guys that have gone overseas and played and done pretty well too.

[We are] Quietly confident. Even in these types of conditions if we play well, play to our strengths and potential we know we can beat anyone on the day. Hopefully it can all come together in the first game and we keep building on that through the series. There are a couple of new faces, but everyone has played for New Zealand anyway so its like rejoining the family after going on a sabbatical or a year overseas. Everyone is in good spirits and looking forward to the first game.

Ranked fourth in the T20I batsmen rankings after scoring 572 runs at a strike-rate of 182 during the 2017-18 season, Munro can also take confidence from a bumper Caribbean Premier League (CPL) for winners Trinbago Knight Riders. Munro was Player of the Series for scoring 567 runs, the most in any CPL season, and then turned out for Balkh Legends in the inaugural Afghanistan Premier League (APL). Though he did not set the tournament on fire, Munro was part of a trophy-winning team and said that playing in the UAE was a helpful ahead of the Pakistan series.

Obviously different conditions over in Sharjah as compared to Abu Dhabi and Dubai, usually lower wickets here and a little slower, as seen by the Aussie series. Having played a bit in the Afghanistan Premier League was good learnings, and nice to get another tournament victory, so you can always keep ticking those off which is very nice, he said.

Good teams make it a bit easier. The CPL was pretty successful in terms of my run-scoring, so I tried to take that into the APL. Unfortunately, it wasn t that good but a well-balanced team experience overseas. Saw some good Afghanistan players and some good local talent, nice to win tournaments and you remember the ones that was the first tournament like the APL. 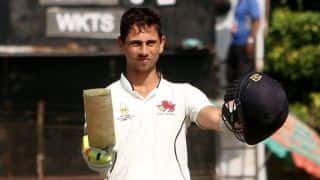